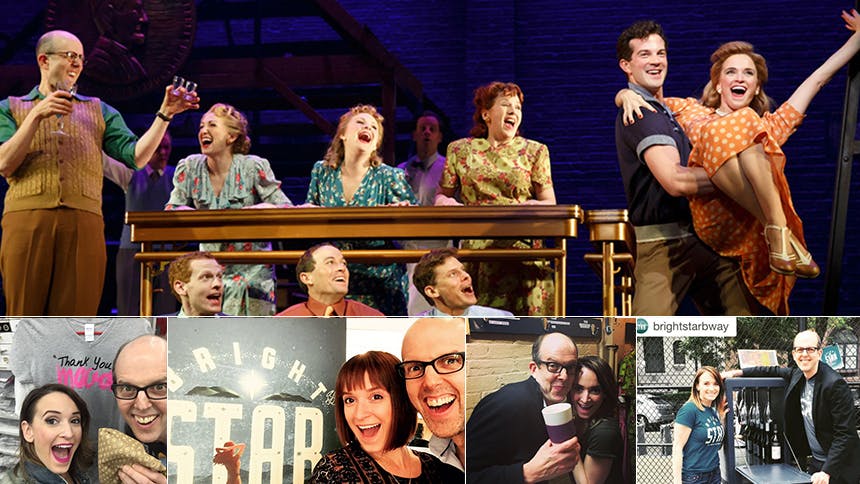 , you've experienced the scene-stealing hilarity of Jeff Blumenkrantz and Emily Padgett as Daryl and Lucy (and if you haven't go see Bright Star already!). The two employees of Carmen Cusack's Alice Murphy, Daryl is an aspiring writer and Lucy dreams of being a literary censor—together these two are Karen & Jack, Ouiser & Clairee, and George & Elaine all rolled into one. Their song "Another Round" is one of the biggest delights of the original musical.

Below, BroadwayBox hears from the dynamic duo about this incredible stage pairing.

My first impression of my co-star:

Jeff:
I suppose my official first impression of Emily was seeing her as “Daisy” in the Broadway revival of Side Show. I went in knowing how great Erin Davie would be and wondering if the twin that I didn’t know would be up to Erin’s level. Obviously, she knocked my socks off—she was amazing! So I was very excited to hear she’d be playing “Lucy!”

Emily:
On the first day of rehearsal I remember seeing Jeff talk to literally every single person in the room, and not meeting them for the first time either. He knew EVERYBODY. I remember thinking a) This man is TALL and b) He better not be funnier than me…He definitely is.

Moment I knew we had a special connection:

Jeff:
That happened about five minutes after meeting her at the first rehearsal. I was pretty upfront with my intention of being her new best friend, knowing how closely we’d be working together for at least the next few months. And Emily immediately grabbed the BFF baton and ran with me, neck and neck. We did an on-camera interview together about an hour into that first rehearsal, and we already had insta-friend chemistry. There’s also a pretty cute selfie from that morning....

Emily:
I knew we had a special connection that first day. We had lunch together. I remember walking over a grate and my skirt flying over my head. We both cackled and maybe snorted…It was love at first sight. We ordered the same salad and ate outside. It was like we had known each other forever. We had lunch everyday after that :)

I think our most memorable performance so far had to have been:

Jeff:
Our first performance in DC, for a very specific reason: Emily and I had been trying to get out of the final scene for weeks. As this beautiful, tender story came to a close, it seemed that the tone wanted to be heartfelt and the focus should be on the two main couples, and yet there we were, with a bunch of jokes that we were sure would be unwelcome and bomb. In rehearsal, we kept coming up with compelling reasons for the director to remove us from the scene or creative ways for us to leave the scene as early as possible, to no avail. As the dreaded scene approached, we waited for the eggwash to hit our faces, and amazingly, there were laughs. Big laughs. We were shocked. And incredibly relieved.

Emily:
I remember one time in DC, Jeff has to roll out Alice Murphy's desk. There was a rough spot on the deck and the desk hit it HARD. It was so loud. And everything on the desk fell off including the phone falling off the hook. Jeff had to reset everything. While playing this incredibly put together office manager. I was dying!!!

My favorite moment onstage with my co-star:

Jeff:
Honestly, we share such a huge network of amazing, tiny moments. But if I had to pick a favorite, I guess I’d say it’s the musical playoff following “Another Round.” We always have a funny (story and character-appropriate) chat during our little dance, and then I get to pull her off stage like I’m giving her the hook.

Emily:
I really love the last scene of the show. Jeff and I are allowed to be so silly and we both have fantastic one liners. (Thank you, Steve Martin) We have built in all these little looks to each other that are probably more hilarious to us than anyone else. Haha.

If Daryl & Lucy had a sitcom, it would be called:

Jeff:
Everybody Loves Lucy, Literally
or
I Tolerate Daryl
or
Will & Grace.

Emily:
Its 5 o'clock somewhere
or
The Beard.

The secret to our performances gelling so well together:

Jeff:
We really like and enjoy and respect each other, onstage and off, and that works well for this story and for our characters’ relationship, and hopefully, it comes across in our performances.

Emily:
I have no idea. I happen to think Jeff is the funniest human on the planet and could spend all my time with him and never be bored. Walter Bobbie said to us once, "For two people not sleeping together your chemistry is off the charts." It just works.

Off-stage, my co-star and I bond over:

Jeff:
Food. Boys. The inanities of daily life. Planning opening night gifts. Flipping flea market items. (Watch for us on a Broadway episode of Flea Market Flip on HGTV in the fall!)

Emily:
Offstage we bond over food, recipes he's tried, theatre gossip (of course) funny stories of our significant others, dumb videos on the Internet...We have been shushed many times backstage. We crack each other up without fail.

I’m in awe of my co-star’s ability to:

Jeff:
Improvise! I love watching Emily when something onstage goes awry, and she has to move to a Plan B. I like to say that the “animal” comes out. This showbiz superhero thing takes over, and she starts pulling out all these secret weapons that no one knew she had! Under duress, I’ve watched her restage whole sections of her song on the fly—there’s no indication that anything was wrong because she’s such a pro, so confident and self-assured, a total “animal!”

Emily:
I'm in awe of Jeff's ability to be brilliant at EVERYTHING. Performing..writing..Playing piano..Directing (he coaches me on every audition I have)..cooking.. And did I say COOKING?!!! He is truly accomplished.

If I had to describe my co-star in as a cocktail, it would be:

Emily:
One of Jeff's favorite cocktails is a Moscow Mule. Vodka..Ginger Beer.. And lime. This is him to a tee. Simple..Sophisticated..and DELISH!