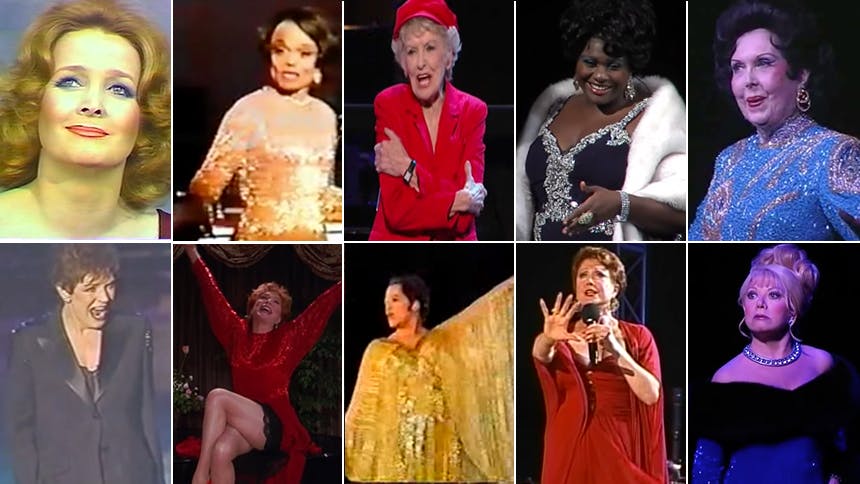 Beginning in November, The National Theatre Live broadcasts its acclaimed production of Stephen Sondheim and James Goldman’s Follies in movie theaters around the world, and us Americans too broke to fly to London will finally see End of the Rainbow Tony nominee Tracie Bennett perform her “I’m Still Here”. Until then, BroadwayBox obsesses over 22 notable performances of the epic Sondheim tune.


You can’t deny the power of her voice or her status as a living legend. That being said, I don’t feel anything and I want to be gutted by this song.


Audio only and heavy lyrical changes landed Babs early on in our list. But dear god, imagine if she played Carlotta for real in the upcoming Rob Marshall Follies?!


The Tony nominee serves MAJOR glamour but sometimes that makes it feel more like an encore in a cabaret than raw performance.


I warned you, I like this song sad—and if you do too, this is IT! But if you want some fun, light-hearted “I’m Still Here” this might not be your jam. The Tony nominee just breaks your heart with it. Almost feels a little too resigned at times—you need a little strength.


For the opposite effect, Tony nominee Sally Mayes lands every joke in this song and it’s incredibly well sung.


This was probably my introduction to the song, so sentimentality weighs in here. This is all about context. It’s a little too rousing, again a little too cabaret number, but damn is it good.

16. Elaine Paige from the 2011 Broadway Revival of Follies


The First Lady of the British Stage sang the hell out of this in the most recent Broadway revival, but it left me emotionally unfulfilled.

15. Christine Baranski from the 2007 Encores! Revival of Follies


The Tony winner can do no wrong in my book. I half imagined it was Diane Lockhart signing this after everyone screwed her over on The Good Wife. There’s something very “Ladies Who Lunch” about it, which makes me think would she be a better Joanne than Carlotta? She just seems too young and fabulous to still be here. I want to shout, “Of course you are, dear, and don’t ever leave!”


The “Queen of the Cabaret”, this Tony nominee is living her best life during this number. A-C-T-I-N-G.

13. Betty Buckley in the 2015 London Concert of Follies


You can’t beat those Betty Buckley vocals. She knows how to keep the audience with her, but I want more grit. I wish it was rooted in hardship more.


When sung by Donna McKechnie it suddenly feels like a campion piece to the Cassie monologue/“Music and the Mirror”. The desperation in those eyes.


The former Elphaba and Wild Party star sells the hell out of this song. She’s young for it, but who cares when you’ve got those vocals and that acting. Yas, Ms. Murney!


The Australian stage star is a major Sondheim interpreter Down Under and it shows. There’s something really ballsy about her Carlotta. She’s a tough dame who lived through it and she’s telling you all about it. I like it. I’d want to drink with this Carlotta.


In the hands of the genius actress, this abridged performance really hits you. Bless the soul who preserved this.


I know, it's wild. It's a college performance but it's so well acted and so well sung. I can't get enough of it. This young performer has such star quality that I believe her as Carlotta. It's cray.


This song truly goes next level when sung by an actual icon who has lived it. When Ann does “danced in my scanties”, I died. Miller makes this a big MGM moment in the best way possible. I love when she comes downstage at around 2:15 like the next part is a confession for her friends and not the performance piece the song had been so far—wonderful choices that really work for her.


There’s such a grandness to Dolores’ Carlotta but she’s also fun. She relishes in the fact that she’s made it through all this and come out the other side. It’s really wonderfully acted—it’s so conversational.


Like Yvonne De Carlo & Ann Miller, the legendary Ms. Kitt actually lived these lyrics and you can tell. It’s like a confession story only a true star could share. She brings such gravitas to the proceedings. She owns this!

4. Millicent Martin in Side by Side by Sondheim


It’s no wonder Millicent received a Tony nom for this. I love a wistful Carlotta and she’s serving it from the jump. So many of these line readings feel so original and fresh—and that ending.


I can’t even count the amount of nights I watched this video in college and the years since. You just have to bow down to the OG Carlotta. Everything here is a choice, not a single lyric is wasted. It’s an anthem. She’s a living monument in this moment.


A true queen. Like with her signature song, “Ladies Who Lunch”, Elaine makes a four-course meal of this song and she’s in no rush to serve it. It’s an absolutely epic performance from an iconic performer. The physicality and the acting, it’s all there.


As I said before, I love my “I’m Still Here” with a big tinge of sadness and bite and Polly nails that aspect in such a truthful way. This character has lived through it and you need that hardness and sadness in the performance. The Tony nominee mines this song for its emotional depths and comes out with my favorite version.