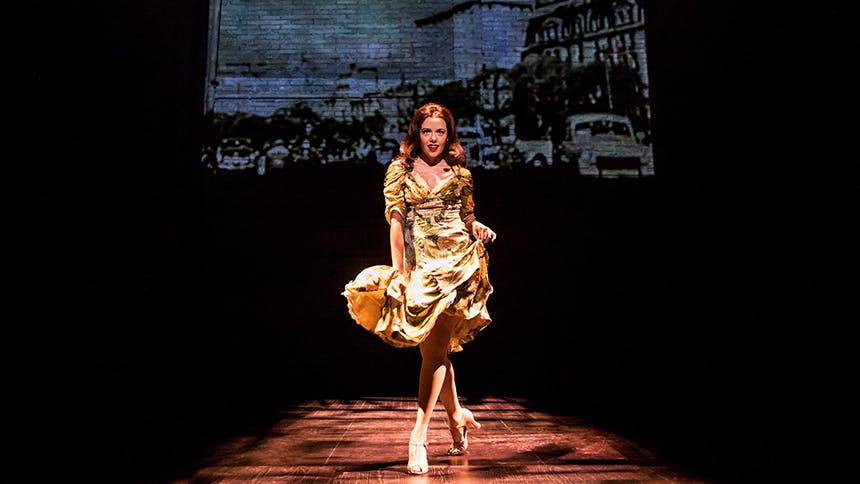 Janet Dacal returns to Broadway as some of musical theatre's most iconic characters in a tribute revue to the genius who created them, Hal Prince's Prince of Broadway. The former star of Wonderland and In the Heights is an audience favorite as Eva in Evita, Aurora in Kiss of the Spider Woman, young Sally in Follies, and Sydney in It's a Bird...It's a Plane...It's Superman.


BroadwayBox caught up with Janet to talk about working with Hal Prince, the devilish siren she wishes appeared in Prince of Broadway, and why Follies is harder than it looks.

2. Your Eva is EVERYTHING. What did Hal tell you in rehearsal that most informed your performance?
First, thank you. We were going over the Evita section of the show in rehearsal, and in the middle of me singing "Argentina", Hal says, in his very Hal way, "She's a queen!" So simple, but it was everything I needed to hear.

3. I was grinning ear to ear during your Superman solo "You've Got Possibilities". Who is your superhero spirit animal?
My mom, a true superhero. Her resilience and attitude towards life is inspiring.

4. Which song from a Hal Prince show that’s not included in Prince of Broadway do you wish you could perform in the show?
"Whatever Lola Wants", Damn Yankees.


5. What was it like performing Spider Woman with Chita and the other many luminaries in the house on opening night?
Honestly, I didn't have time to think about it until after we opened. The days leading up to an opening night are so busy with receiving family and rehearsal and performing. I'm glad it didn't dawn on me until the days following. Chita, I hope I did you proud!

6. What do you think Carla from In the Heights would be up to now?
I love this question! I'm gonna say, getting her Master of Arts in Catholic Theology from Fordham University.

7. Is it especially tough to jump into these moments without the arc of the full show? Do you have any pre-song rituals for Evita, Follies, Superman, and Spider Woman?
Initially it was challenging to figure out where I had to be mentally and physically to perform each number, you have to come in and meet the piece wherever it is in the play. Now, my show is made up of the combination of all of the moments onstage, as well as off. It's its own thing.

Pre-song rituals...well, most of the time I'm quick-changing into the next number, so there isn't much time to prepare for what's coming next. But, before I go on for Superman, into Follies, I practice coming down the Follies staircase that's preset on stage right. It took me quite some time to get used to walking down those steps in heels, without looking down, and making the audience believe it was easy...IT'S NOT! John, one of our stage-hands, always rates my practice run on a scale from 1-10...I've been living in the 10 rating for a couple of days now! WOOHOO!!!

Prince Of Broadway
Best Priced Tickets
Newer
What Makes a Legend? Watch Grammy Nominee Marilyn Maye Through the Decades to Find Out
Older
Katie Thompson Previews Kander & Ebb's "And The World Goes 'Round" for the Abingdon Theatre Company Gala
Sign up for BroadwayBox Discount Alerts