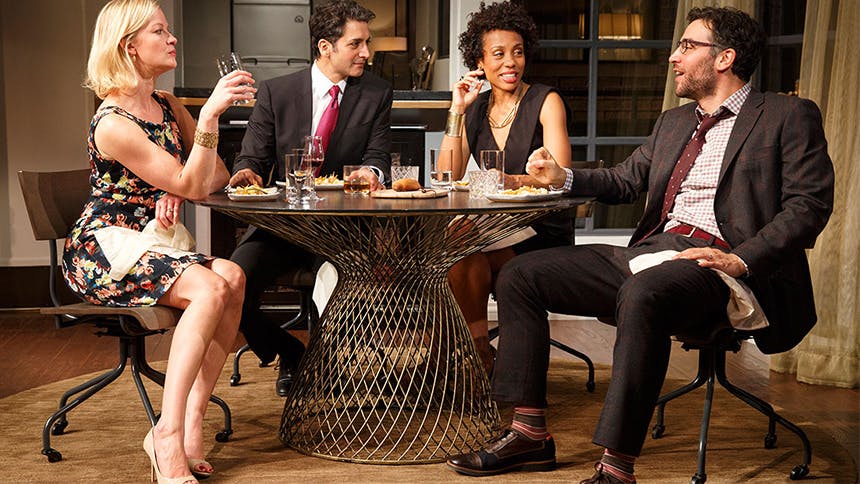 Time is running out to see the explosive new play Disgraced on Broadway. (Seriously, the final performance at the Lyceum is on March 1, so tick-tock.) Below, BroadwayBox makes the case why you must rearrange your schedule to catch one of the final five performances of this daring piece of drama.

It’s a five person ensemble and everyone is really good in their roles (so no shade!) but Josh Radnor and Karen Pittman are giving such sensational performances as husband and wife duo Isaac (a Jewish art dealer) and Jory (a successful African American lawyer). How I Met Your Mother fans should be prepared, this is not the cute, cuddly Ted Mosby…and Pittman’s even more of a badass. It would not be the least bit surprising if either, or both, were remembered with Tony nominations this spring.

Turn off the HGTV and take in John Lee Beatty’s amazing set. Look around, you can tell the actual New Yorkers in the audience because they are seething with jealousy at the start of the show.

How often are you at the theatre thinking, ‘Gosh, I wish they trimmed some of this fat.’ Well, with a quick 90-minute runtime, Disgraced is like being shot out of a cannon. It flies by and there’s nothing there that drags the action down. If this were a meal, it would be all filet mignon; or if it were a cocktail, it would be a heavy-handed pour with only a splash of soda water.

It Won a Pulitzer Prize

You know what’s awesome about the Pulitzer Prize? They only give it to one show a year. Broadway or off-Broadway, musical or play, it doesn't matter; only one show gets this top honor, and in 2013, Disgraced was the best of the best.

What are you waiting for?! Don’t miss your chance to see ‘Disgraced’ on Broadway at the Lyceum Theatre through March 1.