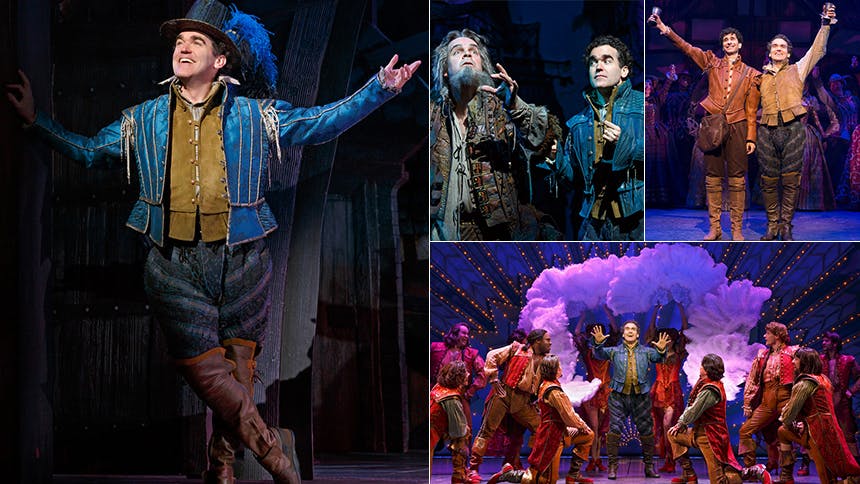 This season Brian d’Arcy James picked up his third Tony Award nomination for his work leading Broadway’s smash hit musical comedy Something Rotten!. d’Arcy James stars as Nick Bottom, a struggling and frustrated 1590s playwright who enlists the help of a soothsayer to create the first musical and eclipse his nemesis William Shakespeare, and he’s singing his face off, tapping, and making you laugh until your stomach hurts. Below, BroadwayBox chats with the Shrek, Sweet Smell of Success and Titanic alum about the demanding new role and his upcoming movie Spotlight.

1. Something Rotten! is such a love letter to musical theatre enthusiasts; what shows did you fan out over when you were younger? Any cast recording you just wore out?
I listened to a lot of Jesus Christ Superstar and Dreamgirls, for different reasons. Superstar was an album my parents had. It was my introduction to musical theatre really, on a stereo, and that was something I listened to quite a bit. And Dreamgirls because it was my first Broadway show I saw in ’84 or ’83, so not only was it my first Broadway show but it was this incredible score. It was what I thought to be pop music on a Broadway stage, much like Superstar.

2. How does coming down from something as physical and funny as Something Rotten! compare to coming down post-show after something heartbreaking like Next to Normal or Time Stands Still? Are both experiences equally as draining?
It’s similar in the sense that it takes time to just come down but for different reasons. The physical aspect of this show is a lot different than say Next to Normal so there’s a lot of adrenaline that goes on from putting out that kind of energy on a physical level, and that is something I’ve noticed and have to be aware of. It involves hunger more than anything.

Definitely after a show of something like Next to Normal, I find it takes me longer time to feel back in the world. After really exposing yourself and going to those depths of emotion, it takes a while to get back into the rhythm of reality, as opposed to Rotten! where it’s so fun that you’re ready to walk out in the New York City street.

3. What was your trick for jumping between King George in Hamilton and Nick Bottom in Rotten! earlier in the season while you were in rehearsals for one and performances for the other? How did you juggle it?
Well, there was no trick really; the thing I was most mindful of was just trying to stay healthy because it was a lot. It was very demanding and very rewarding, but it took almost every minute of my day. So while I was excited about that, I was also very aware of not wanting to suffer and let down the shows I was doing—stretching someone too thin is never a good idea. It worked out fine. I tried to get as much exercise as I could in and eat right—get my vegetables in— and boy, does that go along way.

4. If someone wanted to #TBT with one Brian d’Arcy James song from earlier in your career, what should they listen to? What would you say to start with?
One recording that pops into mind that I absolutely love, but isn’t from a show I was in, is a recording of Maury Yeston’s “Unusual Way” from Nine. It’s not typically sung by a man and it’s just a beautiful arrangement—a piano and cello. I love that song and I love Maury Yeston’s music. Having worked with him on Titanic, it was a thrill to do something else of his. To take a new look at it from a male perspective, not only as a storyteller but vocally, was interesting to me. Overall, I love the way that song sounds and I was really proud of the way it was recorded.

5. You play a journalist in your fascinating new movie Spotlight. Is there someone you’d love to sit down with and interview?
My father died when I was 22 and he was 50 years old and I’m coming up on that myself. Often during the day and during times in my life I say to myself, ‘Boy, I would really like to sit down and talk to my father about this and see what he has to say.’ He was a great, great guy and always had a really interesting perspective on things. So it's a twist on the question because while I can’t do it, I often think it would be great to get his perspective on things I’m going through that he went through and get his take on it. Thankfully I have my mother, who has an equal ability to shed light on things, but my dad—I would love to sit down and interview him.

Head to the St. James Theatre to see Brian d’Arcy James Tony-nominated performance in ‘Something Rotten!’ and download the new cast recording to hear him slay it today.

Something Rotten
Best Priced Tickets
Newer
If You Love Judy Then You Need to Read Seth Sikes Take on 7 Questions All About Judy Garland
Older
Something Rotten!: A Love Letter to Musical Theatre & A Must-Own Cast Recording
Sign up for BroadwayBox Discount Alerts