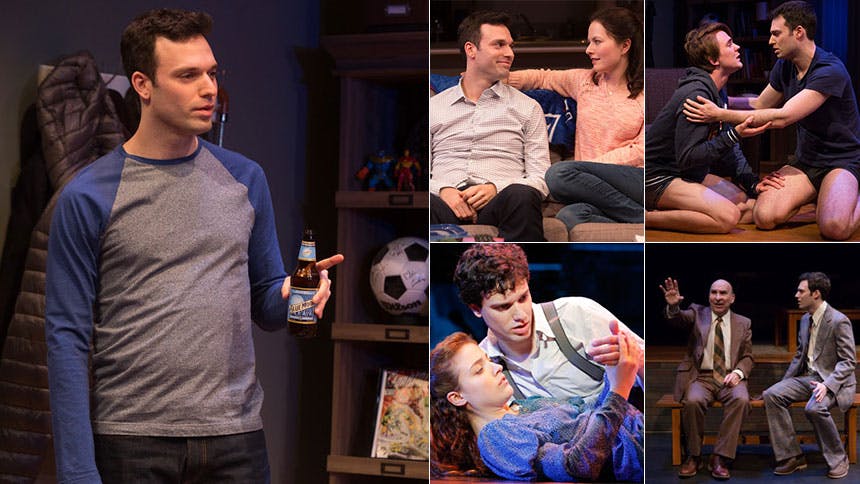 In the critically acclaimed new play Straight, Jake Epstein stars as the captivating and flawed Ben, who is feeling the pressure to take a step forward with his longtime girlfriend Emily (Jenna Gavigan).

The only snag is Ben likes guys, and he is seriously falling for adorable coed Chris (Thomas E. Sullivan).

The love triangle unfolds, twists and turns occur, and in the end the audience audibly gasps as the curtain comes down. BroadwayBox caught up with Epstein to talk about Ben, Epstein's own work as a playwright, and his series of misunderstood heroes.

2. Hashtag to describe performing onstage in my underwear:
#PreShowPlanks or even better: “ToStuffOrNotToStuff

3. Most memorable stage door/post-show experience I’ve had at Straight:
I’ve had several people come up to me after the show and tell me how much they personally related to the story, and how they saw themselves in the character that I play. When I hear this I am so humbled to be telling Ben’s story and grateful to part of something that speaks to people.

Congratulations to a fantastic opening night for #STRAIGHTthePlay! #LivingALabel A standing ovation!


4. If I were to pick, I’d want Ben to end up with:
If I were to pick, I don’t think Ben should end up with either Emily or Chris actually. He spends so much time in the play hurting the people he loves most. I think the dude needs some time to figure himself out before settling down with anyone.


5. My best jager story:
When I was at school in Montreal there was a bar where you could buy five—count’em five—jager shots for 10 bucks. Every night out at this bar was the best/worst.

6. Line I’m most proud of from my play Therefore Choose Life:
After Joseph discovers that his first wife has survived the war, he ultimately leaves his wife of twenty-five years to be with her. Very soon after that, he finds out that she is dying. His son, Sam, ultimately asks his father if it was worth it— after all the pain he caused—was it worth it to be this woman for a very short time. This is Joseph's answer:

Each morning that I wake up, I say to myself—I have the power to choose today. I can choose what I want—what will make me happy. Or I can give in to pressure around me. What is it going to be? I have just today to make a choice. (beat) During the war I lost the freedom to have any choice at all. You know, Chava once said to me if you can’t embrace love then you’re walking through life like a ghost. I’ve lost the ones I love, and yet I’ve never felt more alive."