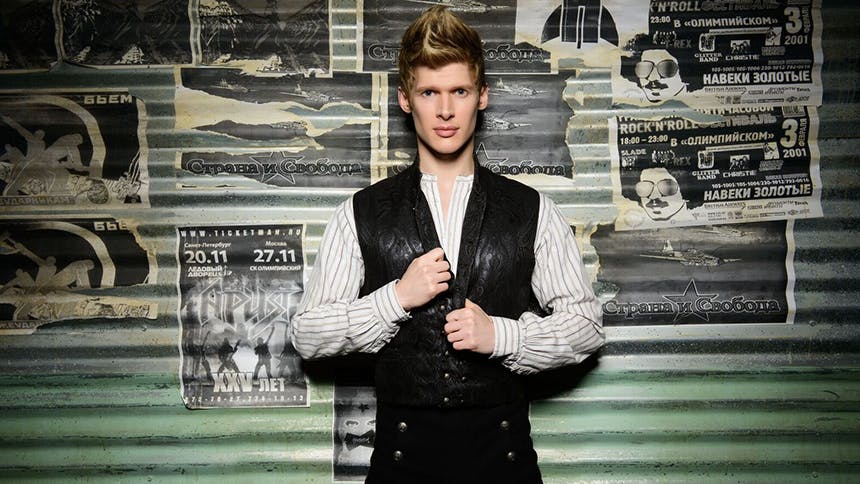 Lucas Steele delivers one of Broadway's most dynamic featured performances as Anatole in the hit, immersive musical Natasha, Pierre, and The Great Comet of 1812

. He is one of the only performers to have starred in all the show’s incarnations: the premiere at Ars Nova, the tents off-Broadway, Boston’s a.r.t., and now Broadway. For his performance as the hot Russian playboy, Steele won rave reviews and the 2014 Lortel Award for Outstanding Featured Actor in a Musical.

BroadwayBox caught up the absolutely captivating Mr. Steele to hear from him about how he built his Anatole—and how Anatole changed as Comet grew from Ars Nova to Broadway’s Imperial Theatre.

The jumping off point for me in looking at this piece and how I was going to create him was to go back to the text that Dave Malloy has written. While the music and the way it’s being presented is more on the revolutionary side of things, the book of this piece is inherently classic in its structure—the asides the characters give to the audience and the idea of a Greek chorus constantly there giving information and commenting on the action. I was first struck by the relationship between Anatole and Pierre, and in looking at classical literature Prince Hal and Falstaff [Shakespeare’s Henry IV] is what came to my mind. The relationship is similar to the Anatole to Pierre relationship because of the way Anatole uses Pierre (who is also a drinker like Falstaff!) for the idea of folly—for Anatole's own entertainment. While the structure of our plays is very different, I feel that quality of Prince Hal—turning your back on someone or not really caring about something you should be aware of—that is a layer that exists inside Anatole. Also, the partying and the rebellious nature that exists in Prince Hal is also present in Anatole. That’s the classical side of my brain of my working.

There were always references to Bowie from the breakdown, even as I went in to audition for this. I had previously been involved in this development deal for a commercial recording for about four years before I got involved in Great Comet, and that album was a modern day Ziggy Stardust conceptually so I was very familiar researching Bowie. I was very much struck by how he redefined the idea of what it was to be a man who is attractive without giving into stereotypical ideas. One of the amazing things about Bowie that exists in his performance of music, but also in his film work (say Labyrinth), is the degree of heightenedness in his performance style. He is completely comfortable in embracing the absurdity of how awesome he is. Because he’s comfortable with the largeness of it, he can get away with it without it feeling unnatural or too big.

If you look at Bowie’s entrance in Labyrinth—the way he shows up in Jennifer Connelly’s room, framed in these windows that swing open with fog—it bears a resemblance to Anatole’s entrance in the show. It ties into this concept that Rachel Chavkin and I always discussed: he’s an alien in Natasha’s world. He’s something she’s never seen before. He emerges from a wall of light and fog. This is a close encounter of the third kind. But it was never discussed. We never set out to make it an alien entrance, but it’s interesting how this mirrors ideas that clearly exist in cinema.

Because the piece is so cinematic in the way it moves and the way it orbits and aligns with the smaller performances, I started thinking about films through the years and leading men. It’s a tricky thing when you’re playing a character where a lot is discussed about his looks. Being a writer myself, it’s easy to look at the character on the page and settle into tropes that previously exist and the idea of how people view a guy like this when he walks into a room. Looking at people who I feel successfully pull this off, Brad Pitt in Meet Joe Black is an incredibly subtle and nuanced performance. I was able to connect the dots that exist from textual information that’s in War and Peace and how it describes Anatole as having a disarming quality. He will walk up to someone and not speak to someone. He will just look at someone and it disarms them in a way. Then it allows him to gain control of what’s going on. He’s very comfortable just observing things, and that’s what Brad Pitt does in Meet Joe Black. He’s like an alien in this living world and it’s what draws people into him.


There is a slight vulnerability to Anatole like River Phoenix in My Own Private Idaho. You watch this guy who is making disastrous decisions in his life but there’s a sensitivity to him that makes you like him and feel sorry for him in a way. I found this picture the other day of River Phoenix with this longish blonde hair and I just thought, ‘Oh, wow! How crazy!’ 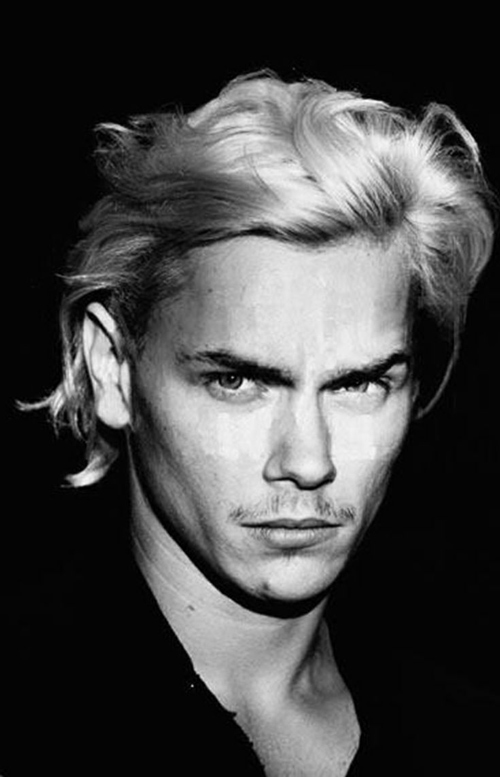 Pertaining to the hair, there’s a section in the book that talks about Anatole and describes his pomaded hair that stands above his forehead. For me that was the impetuous impetus to have the hair live where it lives, and it’s also a slight homage to Bowie.

When I was doing the show off-Broadway in the tent, Raul Esparza was there with this lovely woman who after the show said to me, ‘You remind me of my friend Rudolf Nureyev.’ I certainly knew what an incredible ballet dancer he was but I didn’t know much about him, so I went and looked him up online and found this YouTube clip of him; and I kid you not, at the beginning of the documentary, it’s a close up on his face and he’s surrounded by reporters asking him questions, and he’s just looking at each of them and not answering them. Then in the last chunk of that you see his eye catch the camera and his eyes twinkle for a second and then he winks at the camera. When I saw that I thought, ‘Oh my god, yea!’ It aligns with that idea of I can disarm you with my silence and not let you know what I’m doing.


It was important to me that there remained a grace in the way Anatole traveled the space, and being able to find when I use strong movements and when I live in my body in a softer, graceful way. For anyone who is watching in a detailed forum, that lighter existence (and my voice mirrors this) always happens when I’m around Natasha. When I’m not around Natasha, there’s a heavier sense of things in my physical being and in my voice. It’s part of how he woos and how he wins his conquests over; it’s a reflex of his. I don’t think he’s a true villain—in that true villains know when they are doing something wrong. He truly believes he loves Natasha. It’s the selfish side of him that makes him disregard other people’s feelings in the situation.

I think Anatole’s movement is more like Fred Astaire. There’s a smoother quality almost like he’s not trying. There’s a lot of waltzing in the show and partner work with Natasha. I guess we can consider Natasha his Ginger Rogers.

A super important element to me in this production and how Anatole travels the stage is that I never really want it to appear scripted. I always want it to be functioning in this place that feels like improv. You never know when he’s going to turn and reference the audience. I think someone who does this incredibly well is Hugh Jackman in The Boy From Oz. His ability to treat the entire theatre like it was his living room, that it was that casual—I noted that moment. I had never seen anyone know how to read a room like that, with the audience in the palm of his hand. Yet somehow, he’s accessible. His ability to make people comfortable is a huge advantage and ability and so rare.

[Costume designer] Paloma Young is really smart and understands how things need to be designed to live in this cinematic space, and she also gets what works on people to make them be the most attractive version of themselves. From the get go, she was always saying in fittings, ‘We need this tighter. We need this tighter. We need this tighter.’ As the show started getting larger, it became apparent that we needed a way for the costume to be tight but conducive to the amount of physical activity going on. The pants are very glorified workout material almost that looks and feels authentic but it has a lot of stretch in it. Then as we get into the second act, there’s the hardest 15 minutes of a show I’ve ever done when I lead "The Abduction". It’s a marathon, and on top of that I’m doing it in this amazing jacket. There is specific choreography that I brought into every version because it feels like the soul of the piece; there’s this section where I grab my coat and whip it around as I’m singing, and Paloma was super conscious of that designing that jacket. Even in the fittings she was like, 'Let’s move around.’ So I sat there throwing the coat in the air and twirling around. I appreciate someone like that who is willing to collaborate because then you get the best work.


Don’t miss Lucas Steele in ‘Natasha, Pierre, and The Great Comet of 1812’ at Broadway’s Imperial Theatre.