WTF! 55 Musical Performances From the Last 10 Years That Were Brilliant (And Not Tony Nominated) 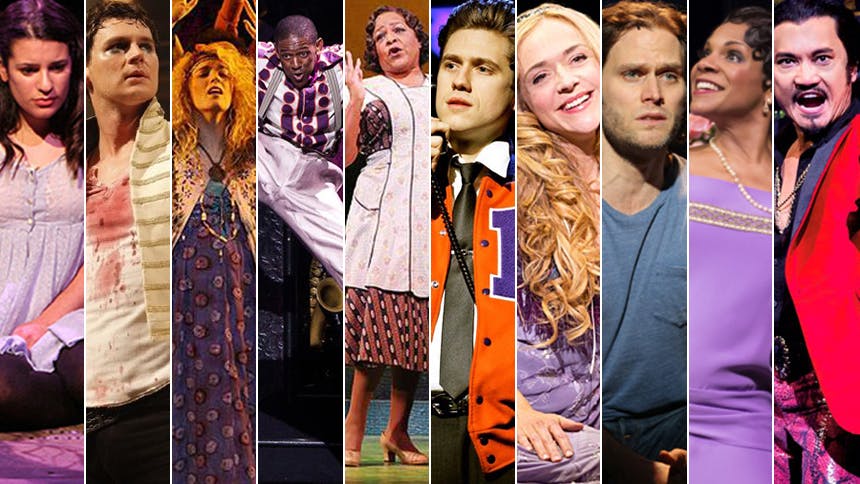 Just because you didn't receive a Tony Award nomination doesn't mean you didn't slay the MF house down. A look back on some absolutely killer performances from the last decade that weren't Tony nominated.


Practically perfect in every way.


I would have nominated her alongside her male co-stars for "Whispering" alone.


Her "When are we going to make it" monologue was absolutely everything. I still think about it.

Mandy Gonzalez, Nina in In the Heights, 2008


You know what they say about how it takes someone very smart to play someone not so bright in a very convincing way. Also these vocals in those shorts...praise.

It's easy to see why Mama thought this June was destined for stardom.


Between this song, the dancing in the club, and "Champagne", Karen's performance arc was totally star making.


Nearly impossible to choose between Mary and Jackie Hoffman—both geniuses.

Adam Chanler-Berat, Henry in Next to Normal, 2009


Hair wasn't the only musical that year with a lovable stoner who stole our hearts.


Equal parts comedy and heart (plus those vocals) made this one of Hilty's most memorable performances to date.

I sometimes wonder if I'll ever see a Jeanie this good again or someone perform "Air" like she did. In a stage of dozens, no one caught your eye like Kacie Sheik.

Erin Davie is a treasure. Her Grey Gardens and Side Show were great but this performance in Night Music was magnificent. There wasn't a joke she didn't land.


Her "Upside Down" still slays me. It was those Saycon vocals and the way she carried herself—she was a star.


He was magnetic and completely other worldly. You wanted to follow him down any dark path.


All you need is one showstopping song, and Terri White sure had it. You could feel the electricity in the room.

Nick Adams, Felicia in Priscilla Queen of the Desert, 2011


As the young, spunky drag queen Nick Adams practically strutted away with the whole show thanks to an unequivocal breakthrough performance—I'd love to see that "Material Girl" moment again.

Daniel Radcliffe, J. Pierrepont Finch in How to Succeed in Business Without Really Trying, 2011


He carried this thing on his back and never missed a performance. Also vocals for days.


Come on! This number was like watching "Look What Happened to Mabel" or some other big breakout leading lady performance.


Who plays a villain like Patrick Page? He really brought something special to the infamous Broadway spectacular.


The First Lady of the British Theatre sang "I'm Still Here" in her first ever Tony eligible role...and it was worth the wait.

John Bolton, The Old Man in A Christmas Story, 2013


Give me an Annie who could sing the Palace Theatre down any day of the week.

Who knew Lesli and her over-the-top Mrs. Wormwood would become the breakout stars of the Olivier-winning musical? She worked really hard to make it look that easy.

A complete reinvention of a classic role, and a performance fans still discuss at great length. It was revolutionary.


In the course of the show, he took us through a lifetime of adventures. He made us laugh and cry.

Warren Carlyle took home the Tony for choreography, and this incredible stand out dancer made it easy to see why.

Lisa O’Hare, Sibella Hallward in A Gentleman’s Guide to Love and Murder, 2014

Steven Pasquale, Robert in The Bridges of Madison County, 2014


This performance was devastating in all the right ways.


She can cook; she can belt; and she can serve major face all night long eight times a week.

I went nuts for this Twentieth Century loon.

Nicholas Barasch, Arpad in She Loves Me, 2016

The balance of stern mom and the star who never made it ("Mi Tierra") made this featured performance pop.

Audra surprised Broadway once again with her incredible dance moves in Shuffle Along.


He's the only actor to appear twice on this list but it's because he gave his all with incredibly nuanced, well-acted starring performances in two short-lived cult musicals.

His Engineer is so sleazy and ruthless, and yet there's a part of you that wants him to get out and realize his American dream. Such a wonderful debut.

For Bandstand, Corey created an original role from the ground up and taught himself piano so that he could play the show live each night. Bravo.


Rita is a tricky role in a vehicle that's built for Phil, but I think this is the beginning of a long, long stage career from an incredibly talented young woman.

What becomes a legend most? Stopping a new musical with a big dance number and lots of comedy.


Broadway's never seen or heard this side of Osnes before and all I can hope is that we see it again and again.

Newer
15 The Lightning Thief: The Percy Jackson Musical GIFs That Are 100% Mood
Older
Katie Ladner Gives Instagram an All Access Pass Behind the Scenes at Sunset Boulevard