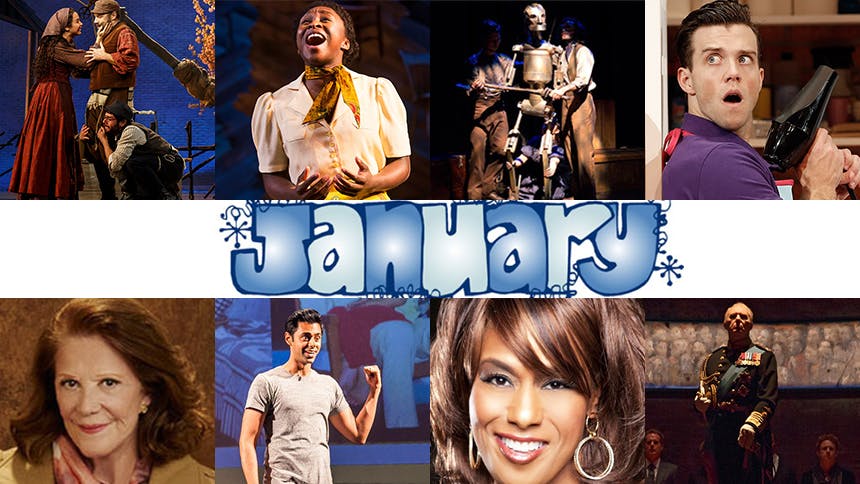 It's the first month in 2016, get out, live, and don't miss these 10 plays and musicals lighting up NYC.

1. Start the new year off right with tickets to the acclaimed new revival of Fiddler on the Roof

. It's the award-winning musical you know and love but with a fresh spin that makes it all the more powerful and enjoyable. Also, the cast is just perfection.


2. We named The Color Purple

the number 1 show of 2015, what more do you need? Treat yourself in 2016 and get over to see Cynthia Erivo, Jennifer Hudson, and Danielle Brooks at Broadway’s Jacobs Theatre ASAP.


3. I can’t say enough for how fun, unexpected and hilarious the New York production of Boston’s long-running whodunit Shear Madness is. You can seriously take anyone to it (mom, a date, a friend, a co-worker) and you’ll have a blast solving this interactive murder mystery—take a risk, you won’t regret it.


4. This is your final month to see the Broadway transfer of the Olivier Award-winning drama King Charles III

. It’s a future history play that imagines England’s current Royal Family scrambling for power and discovering who they really are in the wake of Queen Elizabeth’s death. A must for Anglophiles, Tony race experts, and Shakespeare devotees.


5. Tony-winning playwright Richard Greenberg and Tony-winning actress Linda Lavin team up for the New York premiere of the new comedy Our Mother’s Brief Affair. Lavin stars as a perpetually dying mother who makes a shocking confession to her adult children of a passionate affair long past; and since it’s Linda Lavin, I’m sure we’ll be quoting her line readings well into 2017. Samuel J. Friedman Theatre

6. Oz fans cannot miss the remounting of The Woodsman

7. Hasan Minhaj: Homecoming King is back by popular demand. The acclaimed one-man-show starring The Daily Show correspondent tells the true story of his experiences as a first generation Indian-American, and audiences and critics alike are going wild for it. Performances through January 30 at the Cherry Lane Theatre.


8. Start the year by challenging yourself with an entertaining and thought-provoking look at Staceyann Chin, a lesbian activist, as she embarks on the journey to single motherhood in MotherStruck

. The solo show only runs through January 29 so hurry to the Culture Projecy’s Lynn Redgrave Theatre.


9. Grammy and Tony Award winner Jennifer Holliday is throwing a one-night-only concert in NYC on January 18 at 42West benefiting Arts-for-All. The evening is a live Broadway Names with Julie James show and features a slew of celebrity guest stars all singing to the hilt.

10. Kevin Zak and Josh Lamon are producing and starring in two of the most exciting Feinstein’s/54 Below shows of the month. The first is a live presentation of the beloved film The Muppets Christmas Carol

on January 4. Then they return on January 25 for Bloody Bloody Angela Lansbury, a live, original musical spoof of Murder She Wrote. #AllThePraiseHands