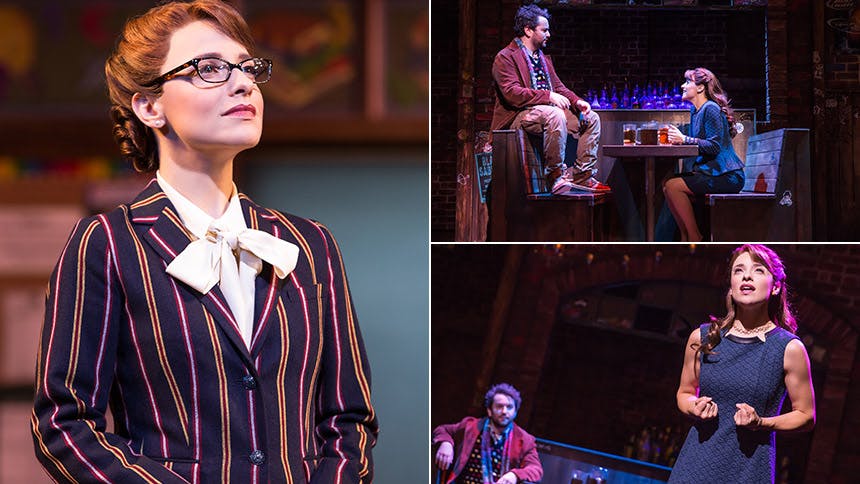 Jenn Gambatese (All Shook Up, Tarzan, Hairspray) is back on Broadway after an eight-year absence (during which she starred in several regional productions, including Carousel, The Sound of Music, & Annie Get Your Gun). Gambatese knocks it out of the park as Horace Green's uptight but lovable principal, Rosalie Mullins, in Andrew Lloyd Webber's hit musical School of Rock. Her big song, "Where Did the Rock Go", enjoyed three different mid-song applause moments on the night I had the pleasure of seeing her. BroadwayBox caught up with Gambatese to talk about returning to The Main Stem, her upcoming Rodgers & Hammerstein album, and getting her voice rock ready.

1. This role really spans the range of its actress’ voice. What’s your warm-up like before the show?
I warm up for at least 20 minutes during my drive in from Westchester.  Good thing I'm not taking the train, lol!  I do a series of legit and belt exercises and then a song or two.

2. What song/artist could make you full-out sing in a bar/restaurant like Rosalie?
I was seriously born in the wrong era, so for me it would be Frank Sinatra or Rosemary Clooney.  But if I was picking a rock Goddess besides Stevie Nicks, I'd go with Pat Benatar.

3. What was your first night back on Broadway like after an eight-year absence? How did it feel walking into the theatre, singing “Where Did the Rock Go”, doing the curtain call?
Well, it was a bit intense because I only had a week to learn the show and found out the day after my first night on that I was doing it with a trachea infection!  Somehow I got through, but it was agonizing to realize I had to call out of my second show. I'm really glad I listened to my body though, and thankfully our day off was that third day; so once the infection was diagnosed and treated (thank you, Dr. Korovin!) and I rested a bit, I was able to get back on the horse for the five-show-weekend.  But I have a feeling you'd like to know what it was like emotionally!  I would sum it up with Immense Gratitude.  Everyone at the Winter Garden, onstage and off, is lovely, and I am so happy to be back on Broadway.  In the time since my last Broadway show, I've had two beautiful little girls, done some dream roles with wonderful regional theaters and opera companies, and toured the country with Wicked, but there is nothing quite like being an active member of the Broadway community!

4. Which Rodgers and Hammerstein lyric would your friends and family say describes you?
Oh my gosh, there are so many!  "Corny as Kansas in August" and "Stuck like a dope with this thing called hope" come to mind!  But in a nutshell I'm a "Cockeyed Optimist", which is actually going to be the title of my Rodgers & Hammerstein album for Jay Records coming out in February 2017.  All three of those quotes are from Nellie in South Pacific, and she's still a dream role of mine.

5. Which of your previous Broadway credits taught you the most about yourself as an actress and Broadway as an industry?
Such a great question!  And honestly I think that each and every show teaches you about yourself in different ways.  Whether it's facing fears, digging deep or the thrill of soaring...usually a combination of all of those things!  In terms of learning about Broadway as an industry, I would say the unfortunate early closing of a great show like All Shook Up was a real lesson learned about how so many things need to align for a show to have the run it deserves.  As the great Irving Berlin said, "There's no Business Like Show Business"!


Get yourself to the Winter Garden Theatre to see Jenn Gambatese rock and soar in School of Rock.