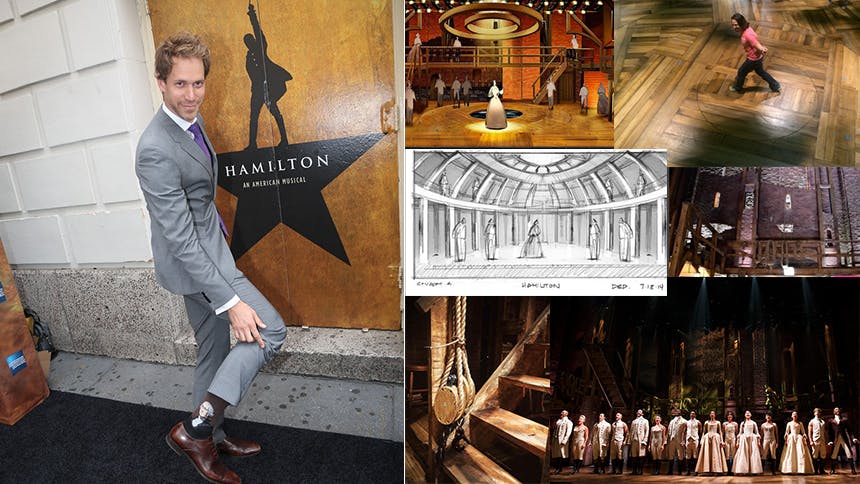 Set designer David Korins received his first Tony Award nomination this season for creating the world of Hamilton—and it’s pretty insane that he hasn’t been nominated before, especially when you consider his work on Vanya and Sonia and Masha and Spike, Motown, Misery, Annie, Chinglish, Pee-wee Herman and Passing Strange.

BroadwayBox caught up with Korins (who also did Grease: Live! and will be on Broadway next season with Dear Evan Hansen) as he revealed 10 secrets of the Hamilton set you might not notice at first glance.

1. The walls grow between Act One and Act Two to show the progress of building the foundation of the country. We actually fly in all the different sections of the upstage wall at intermission, around 8 feet more of wall at each bay, and add another additional scaffolding in the air upstage left that no audience members even see, but hopefully they subconsciously feel the different massing and changing of the overall structure of the set.

2. We used to have a pool in the show. For about two previews at The Public Theater we used to end the show with a pool. When Eliza asks the question, ‘who lives? Who dies? Who tells your story?’, we used to have six members of our cast come pull up the center section of the turntable and reveal an actual live water pool, so that Eliza and Alexander could meet in this netherworld with a beautiful final tableau moment being hit by a reflection of light and rippling water. But we cut it in the end because we didn’t want the narrative to be, ‘Who lives? Who dies? Who tells your story? Is that real water?’ But there was a pool and we just drained it. It still existed in the turntable all the way until we went to Broadway.

#tbt back to #HamiltonPublic when we used to end @HamiltonMusical w Alexander & Eliza standing at the edge of a reflecting pool. Took endless hours to draft, engineer & tech into the show....& 2 previews to cut. #designingisredesigning


3. In addition to the walls growing, we actually change out much of the dressing between Act One and Act Two—the props change. In Act One there are rifles and really utilitarian building materials and things that denote wartime. When the war is over and were back for Act Two, we replace them with literary things and finer objects—things like plates and maps—things you could govern with as opposed to fight with.


4. Another thing is the Broadway footprint is smaller than it was at The Public Theater. Most people think when you move uptown and expand to a Broadway-sized proscenium, shows get bigger; and the show definitely feels bigger uptown but I think that’s because the room the audience is sitting in is not a shotgun style theatre. The actual stage space is smaller uptown.


5. Because of space constraints on the Broadway stage, we actually use the Washington/Jefferson staircase that comes out for ‘What’d I Miss’ very frequently offstage as an escape stair when it’s in its parked position and to hold props and things. People run up and down that all night long, and then only in those two moments do we actually use it as a staircase.

6. Much of the set is built with metal, and then every piece of wood is taken out, sandblasted, and then clad onto the metal. The building methodologies back in the day used long tooth saw blades, and they burned very consistent marks on the side of the wood. We actually hand-painted in every single one of those saw blade marks to recreate what it would look like if this set were built then. It took months of work. It took 12 weeks to build the set with many, many people working full time.

7. Similarly, every one of the props and all the furniture have been painfully and perfectly recreated from the originals—so Washington’s desk and Hamilton’s desk were recreated from the originals but made with much harder, more rigid materials so it could withstand Daveed jumping off it. All the hand props in the show—including the Reynolds pamphlet and the letters to Hamilton—are the actual things recreated for the show.


9. Because of the choreographic insanity that goes on every single night, we had to have as few seams as possible on the floor. We hand-painted every single one of those floor boards and literally laid out the pattern of the seams of the sheet good so that every single seam is masked by a seam in the floorboard. The only lines you see on the floor are the two rings of the turntable—everything else is perfectly laid out and calculated because I can’t stand looking at an uncontrolled seam floor, and with the rake of the Rodgers you see the floor.


10. This one is perhaps most personal for me. I have two daughters, Stella (who is 10 and half) and Vivian (who is six and a half), and they visit me a lot at work. I brought them to The Public Theater when we were loading in the set and we carved their initials into the set— on the platform upstage center in the center beam of wood, down low around mid-calf height. When we moved the show from The Public to Broadway, we kept that piece and it stars center stage every single night. Renee spends a fair amount of time up on top of the catwalk, especially during ‘My Shot’, and she said, ‘I think about you every single night because I go there and see Stella and Vivian’s initials, and it makes me smile.’


Score a ticket to Hamilton to see Korins' work IRL at the Richard Rodgers Theatre.