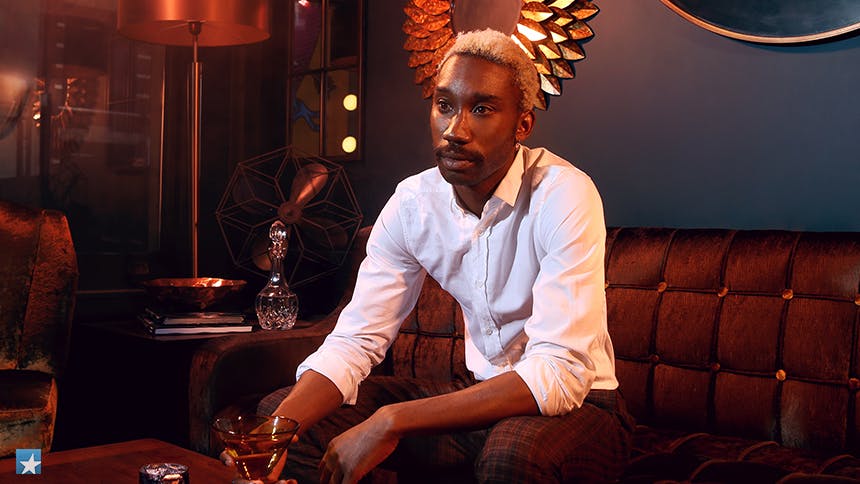 BroadwayBox teams up with photographer Curtis Brown to present "Ushering in a New Golden Age", an exclusive photo and interview series in which we spotlight the breakout stars from the 2018 Broadway season and style each like Broadway's original age. This illustrious crew of Tony nominees, Drama Desk nominees, and fan favorites was photographed at the beautiful Hudson Theatre (home to next season's new musical Head Over Heels). Next up is British stage and screen star Nathan Stewart-Jarrett, who makes his Broadway debut as Belize (a former drag artist turned nurse during the AIDS epidemic of 1980s New York) in the Tony-nominated, critically-acclaimed hit revival of Angels in America

. Nathan began with the production at the National Theatre in London and transferred to New York to open the two-part drama's first Broadway revival (which is now the most Tony-nominated play in Broadway history!).


1. Was there a big role in high school or university that gave you the confidence to pursue this?
I went to performing arts high school so in a weird way I was already pretty confident about this. I really liked this amazing Steven Berkoff play Messiah and there was this big Devil’s speech that I used to like doing in school.

2. What has changed most in your life since taking on this role?
Belize has affected me more as an actor than my personal life—apart from me being in America. As an actor, immediately feeling the impact of the show that is so cherished and adored by so many people. It’s not every day you do a character like this where you can see and feel the immediate impact at the stage door. Doing any job like this—something that is so big and so long—changes you as an actor.


3. This series is all about this Broadway season’s breakout performers. If you could time machine back and see any big Broadway or West End icon’s breakout stage performance, whose would you want to go back and see?
I want to see Bernadette Peters breakout or Harvey Fierstein’s breakout performance. In terms of London Theatre, I would love to see Maggie Smith on stage. I’ve never gotten to see her on stage; I’m too young. She’s a comedic genius and what she’s able to do is madness.

4. What’s the most sentimental thing in your dressing room?
A really lovely fan did some drawings of me in a scene, and that's the thing I'd go in and rescue. It's really cool.


5. What’s been your biggest obstacle in reaching this point?
My personal biggest obstacle (and not to be flippant about diversity and inclusivity, and who gets parts and how many roles there are and what scripts are about), but I think if I boiled it down to myself, my greatest obstacle has always been belief in myself. It’s something that on one hand has been unwavering but I also have to do a daily top off and remind myself. I think every artist and actor goes through that. But on a greater level, the other obstacles are still clear.

6. What advice would you give to future actors who will play Belize in Angels—be it on Broadway, on the road, or at their school?
I’m going to give myself advice here since I’m still doing it: HAVE FUN! I take things very seriously, and you can have so much fun with this character. At times, I have not had fun in the past, but I’m definitely having fun now. I’d say, start in the place of joy and continue on that journey. It will get difficult, and that joy will get stolen (because that’s in the story), and it will cost you something; but start from joy and retain that joy, because you go back to joy.