Groundhog Day Is the Must-Own Cast Recording of the Spring 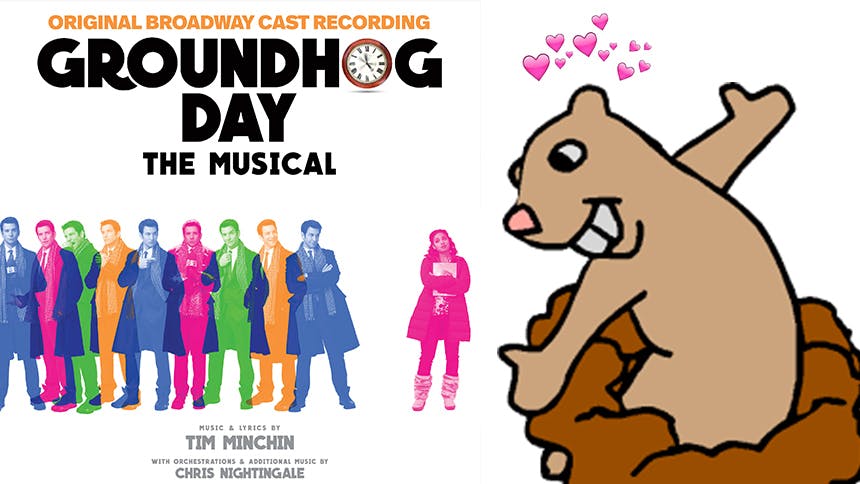 , starring Andy Karl and Barrett Doss, and no joke, I just have it playing on repeat all day—it’s so damn good.

Below, BroadwayBox reacts in GIF to hearing the cast recording for the first time.

Starts fun and jazzy and then becomes very ominous.

2. There Will be Sun (Company)

I am so impressed with Tim Minchin’s music and lyrics on this show. It’s so smart and adult, yet it’s super catchy and really pleasing to listen to. The arc of this 10-minute-long song is brilliant. Also, #TeamAndy

I’m honestly obsessed with the “who is that/who is that emerging from his burrow” intros each of these has. Still living my life.

You could totally listen to “Day One” as a stand-alone song but the rest you need to hear chronologically.

Not only a seriously funny song but also an interesting commentary on the healthcare industry.

I just added this to all my most listened to B'way playlists. It's so funny and the country music sound is so good. It's impossible to stand still during this.

The track is almost entirely instrumental and it's sooo smooth...such a cool way to rearrange the song we keep hearing over and over.

Not only is this prob my favorite track rn, but Barrett Doss better SLAY. Damn! Such a wonderful story song and a killer act one closer.

And we're back in it with that familiar, danceable music.

Justice for "Playing Nancy"! It's a great, heartbreaking song and Rebecca sings it so well. Think of it as the "Another Suitcase in Another Hall" or "Another Life" of GHD.

Damn, Andy Karl set fire to that song! Felt like a rock song you would have heard on the radio in the early 2000s.

13. Everything About You (Andy Karl)

Very nice, very sweet, and so different than what he just did in the song before.

I've been singing this song for weeks. I am going to play this song out this summer and you should too. Get it on those playlists.

15. Everything About You Reprise (Andy Karl)

Gorgeous. So moving. I have chills.

This too is mostly instrumental (and it's a wonderful moment on stage). If anything it made me really appreciate the thought and nuance that Minchin put into the score's themes and repetition.

Selfie. Me listening to this wonderful cast recording. This final song was beautiful and emotional. I'm going to have this album on an endless loop.