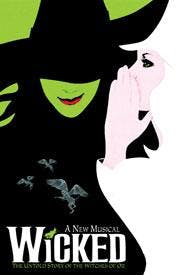 Wow! Mind-blowing performance! Amazing effects. Everything about Wicked was sensational. Look forward to seeing it again.

I saw Katie Rose Clarke as Galinda/Glinda, she was one of the best! Almost as good as Kristin Chenoweth, she was that good! I saw Jessica Vosk as Elphaba. She had a voice with no flaw!! If you saw her, you would clap until your hands hurt! Almost like Idina Menzel!! And as the Wizard, I saw Kevin Chamberlin. I knew Kevin from the TV show, Jessie. Who knew he could sing so well? A 5 star and must see show if you ask me!!!!

This show was a fantastic experience and a real memory that I'll remember forever! It has some of the best songs since The Lion King! Elphaba's story is very......well.......you know.;)

My friend took me to see this musical, I had no idea what we were going to see, it was a wonderful surprise. Loved it & Elphaba has a beautiful voice. The cast was great, this is a must see if you want to see a Broadway show don't miss "Wicket."

Having first seen a show on Broadway over 40 years ago, and seen touring Broadway casts in the meantime, Wicked is my all time favorite. Having seen the show six times (both tours and San Francisco) before finally making it to Broadway I can say the show here just seems more powerful, the cast more enticing, and acoustics more amazing. If you can only see one show in New York, you have to be a little Wicked.

Wonderful Witch of the West!

I was gifted tickets for my birthday. What an amazing show!! I absolutely loved everything about it and elphaba has one of the best voices I’ve ever heard!!! Definitely will see again

I had went to see Wicked for my birthday this year. It was my second time and it was still an amazing experience. Glinda and Elphaba have chemistry unlike none other. It's worth the couple bucks to watch the show. Every show is done, and they put out their best effort, no matter how exhausted they may be. You're also able to meet the actors at the stage door afterwards, which is great. I had gotten Nessarose and Boq's signature, which made me happy. Also, if you buy drinks, you'll get free Wicked coffee cups :D

The characters were amazing, they indulged you in their well told story about the wicked witch of the west. A definite must see.

The BEST musical EVER

The characters were amazing in the indulged you in this well told story. Go see if you can it's worth the money.

My first ever Broadway show. I've seen touring companies perform shows in California, but they don't compare to the magic that happens in NYC. Wicked is a captivating story that calls upon your imagination to relive a new understanding of the wizard of oz