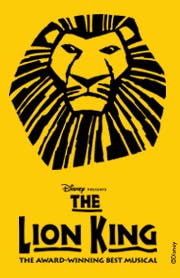 Latest Reviews for The Lion King

I like the entire show. The most amazing of all were the costumes and wonderful the actors played the animal characters.

The lion king is a great play to see how every why is it so expensive?

I love the singing and dancing

Amazin stage set design and costumes...funny and entretaining .love it !

I enjoyed the entire musical. From the beginning to the end I was on the end of my seat the entire time. It was not one boring moment I was never lost. Awesome Awesome. I will definitely see it again. This definitely went on one of my favorite birthdays list. I love the movie the soundtrack and now the musical.

Creative and spectacular performance. Everything from the detailed costumes to the passionate and energetic actors, this show was great. It was comedic too, something I wasnt expecting. It is a very well put together play with awesome effects. I would definitely reccomend if you're children like Lion King. Great show.

I took my 8 year old daughter to see the show. It was amazing. The cast was excellent. The way the theatre transformed after different scenes was breathtaking. The entire story was captivating. We never felt bored or lost. From the opening to closing scene we were at the edge of our seats. My gosh I never experienced anything like this before. I would encourge every and anyone to see this show. It was such an amazing experience that my daughter & I decided to see atleast 2 broadway shows a year. The Lion King will always be special to us. Everyone involved in this spectacular production should be proud.

This was a 5 star musical the amazing costumes and it's music was great!!!

What makes this show special is the stage set designs and the costumes and all the visual elements. Unlike most other shows where costumes and stage sets are two separate categories, there is a blend in the stage set and the costumes in the show. The puppet like figures that are in the shape of the animals controlled by the actors on stage definitely contribute to the visual elements of the show. I had the chance to see the production at rear mezzanie seats last summer and it was definitely worth it. The characters and costumes along with the beautiful stage sets really does bring together the safari world and from far away, everything looks like real animals! It is a perfect combination of art, entertainment and music :) Because Lion King is able to bring all these three elements together, it becomes a great show. It's also a great show to watch with Family and Children especially when the cartoon that children love is brought live at a whole new dimension. It is also a great show for children because it really teaches the value of family and the importance of having parents in our lives which is of course no other than Walt Disney's trait. Because the show stays loyal to this trait, the show becomes suitable for everyone. I best recommend front mezzanie seats for those of you on a low budget. It is affordable and yet you can see the entire show as if you are in the safari itself

Excellent! Wonderful!
Great music. Amazingly creative puppetry. Beautiful stage set. Amazing how they were able to pull this African Savannah setting off on a stage! Beautiful use of all African culture, wardrobe, art and music.
The acting is over the top. The show takes place not only on the stage but all around you at times and even over your head. A completely amazing experience. Highly recommended. Went to see it twice! It was THAT good!
Worth every cent!

This show was absolutely awesome!!!!!! I had seen it 7 or 8 years ago and I've been wanting to see it again for a while. I finally went and it was well worth it. All the costumes and sets were out of this world! (My favorite costumes were the cheetah, elephant, and Scar.) this show is awesome for all ages - not just little kids. it's better if you know the movie before but you dont need to. in a nut shell, out of the 10 broadway shows i saw, the lion king is definitely up there even though i loved all of them:) its a must see for everyone!!! theres a good reason all the shows are sold out!