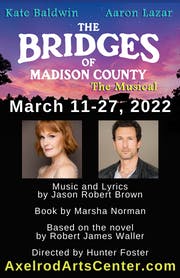 The Bridges Of Madison County Reviews

Latest Reviews for The Bridges Of Madison County

shame this play is closing May 18!!

What a shame! Closing shop on May 18th.

What a gem of a show. With so many splashy, over-the-top musicals playing on broadway right now, it was nice to see something so simple and elegant. Kelli O'Hara is absolutely stunning... she has a great chance at winning the Tony this year. Steven Pasquale is a dream. A hauntingly beautiful score by Jason Robert Brown. The whole audience was in tears... don't miss it.

I normally don't see anything twice and since I'm a native New Yorker, I have ample opportunity to do so. However, Bridges is like no other show I've seen in a long time. Jason Robert Brown's music is so gorgeous, so moving in both lyric and melody, that I couldn't get it out of my head. Kelli O'Hara and Steven Pasquale are perfectly cast and the connection between them is evident from the first time they set eyes on each other. The show is beautifully staged and the other actors add dimension to the story that is so believable. If you see only one Broadway show this season, Bridges is the one to see. I plan on seeing it again.

Why go? The music is gorgeous and amazing. And to a have talent like Kelli O'Hara to sing it is a gift. My surprise was discovering the voice of Steven Pasquale...amazing!! And he's not bad to look at either. I enjoyed Cass Morgan as the neighbor and comic relief as well. Not a perfect show, but enough pluses to be well worth your time.

NOT TO BE MISSED!

My husband and I just saw this phenomenal production on Saturday, 3/22/14. An afternoon of sheer bliss. The audience is immediately sucked into the story which feels totally new even if you read the book or saw the movie. The staging is clever and innovative as we watch the "crew members" (who are always on stage) move the set pieces around to create the needed backdrop of each act right in front of us. The plot moved us through a full range of emotions from amusement to pathos. The acting is superb; the musical score outstanding and the singing...transforming, uplifting, breathtaking-hard to find the perfect adjective to describe the experience. GO!

The singing is amazing from the first note of the first song to the last note of the last song. I went with 6 friends, they and everyone in the theater seemed to love it, major standing ovation and I am an avid theater goer, this is one of the best. Jason Robert Brown is an incredible composer and you "feel" his gorgeous music! The acting and staging were superb. I would see it again

I saw this show a week ago and cannot get it out of my head! I went to the theatre with high expectations, having heard some of the music prior to going. Usually, when I have high expectations, I am disappointed, but not this time. I have never been so moved by a show and so in awe of the performances. Kelli O’Hara will win a Tony for this role, and I say that knowing that Audra McDonald (who I’m a BIG fan of) is also going to also be eligible for a Tony this year. Steve Pasquale is as talented as he is gorgeous and as a musical theatre fan, my only disappointment with him is that he waited so long to make his Broadway musical debut. Jason Robert Brown’s music is sensational and his songs are in the hands of such highly skilled singers that can both lay down a song with technical perfection and communicate a song that touches your heart. The show is not perfect. There are some staging and directorial choices that would not be my preference, however, I found myself not caring, because such great things were happening on stage that nothing else mattered. I have seen hundreds of Broadway musicals and this is one of my favorites. The song “One Second and a Million Miles” is the greatest thing I’ve ever heard on a stage. I had chills from beginning to end (and it’s an 8 minute song!!). Go, enjoy, bring tissues!

The Bridges Of Madison County
New
Discount up to $20