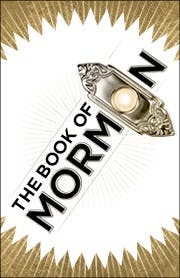 The Book of Mormon Reviews

Latest Reviews for The Book of Mormon

Booked out for a reason...

Sinks its hooks in right from the opening number, featuring irresistible tunes, wonderful characters, a well crafted plot and slick design. This is easily the funniest new musical since Avenue Q. Well worth the months-long wait for tickets. Oh, and it's joyfully offensive on all fronts - but you're prepared for this already, aren't you?

Yes it is smutty, yes it is crass, and yes it does make fun about Mormons and Africans, but it is more then that. The truth is, it pokes fun at everyone.

Beautifully performed by an amazingly talented cast, the dance scenes were wonderful, and the vocals were fantastic.

I did not know much about the Church of Jesus Christ of Later Day Saints other then they go door knocking, that being missionaries is a major part of their faith, and they used to do multiple marriages.

Prior to seeing the show, I read up on the background of that Church, so I could put things into some context. The number of strange references were quite interesting and shows a lot of research went into the story.

Like most episodes of South Park, there is a message or two in it, not leaving your buddy and helping people, as that is what you want to do, not expected to.

Hilarious, Highly Recommended for the Open-Minded

This is a show for the open-minded, those who can accept other points of view - that is, normal people! Great acting, great cast - and so very funny! Loved it, highly recommended. And the auction at the end for Equity Fights AIDS was hilarious! This cast can really think on their feet too, congrats to all on a great show!!!

Prepare your self to Laugh... alot!

Saw the show this past weekend.. Was an enjoyable show from start to finish. The book was very witty full of sight gags, one liners and even some parody for old broadway. The score was tunefull, but I think most will focus more on the funny lyrics.

The 2 male leads were very funny and the rest of the company was wonderfull as well.

My only complaint is that is I laughed to hard and missed some lines, so I will definetly see again :)

What a great show! No tune in it that was even close to being lame. Cast was extremely polished. Orchestra sounded great playing the smart orchestrations. Sure, lots of "adult" language, but none that could be considered gratuitous for the message this show ultimately presented. This is smart humor - a show that actually delivers an incredible - and, for a real change, ORIGINAL product. Show tunes with actual melodies. Fun choreography. Go see this (but leave the kids at home).

This could be a BIG hit!

We went this one because of the name and being in the Community of Christ - the "other" Morman church. This was a "hote" from begining to end. Every bit as good as Ave Q with even a good message about everyone help each other. The language might put some people off but it made a good point! The acting was out of this world and hope they keep the line about "being in preview" when it does open. Won't go wrong seeing this one!!

My girlfriend and I went to see this just this past weekend...right away we could tell broadway's got another hit on its hands. you can tell time went into preparing a good storyline for this production. The combo of avenue q and southpark writing comes through.
We are already looking to go in march 2011 when it opens officially !!LOVED IT !!!

OMG just got back from seeing this show. Funny , funny , funny. At one point was acutally crying with laughter. Just one warning if you are a prude the show might offend you. But best show I've seen this year. Would go to see again.