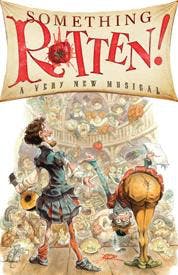 Latest Reviews for Something Rotten

I was one of those people giving "It's A Musical" a standing ovation mid-Act I last year -- Brilliant! While Act II is quite good, Act I is Perfection!! Sorry to see a number of original leads go .. but the new cast is fine -- saw it twice more this year (even though I'm not local). Sorry to hear it is closing (glad to hear it will tour) -- See this where/when you can: Fun, Silly, Upbeat, and "Egg"cellent!

Very clever and funny with a terrific cast!!! A must see! It's everything a Broadway show should be!

You will hum the tunes after this very funny show

The number Musical from the first act and the egg song near the end of the second act are show stoppers. Cast is great, music is lively. It's a terrific fun show. Five stars out of five.

Not only was this show hysterically funny but had several levels of references that made it so appealing. I loved it.

Fun and intelligent. Creative and full of real show stopping numbers. Shakespeare wishes he was this good!

This is a new take on the old musical format. I can't remember when I had a more fun time at a Broadway show! Book, music, and presentation were all wonderful, not to mention a stellar cast throughout!

If You Love Both Shakespeare and Musical Comedy

Witty lyrics, excellent acting, serviceable music. Only question I have is if you are not into BOTH the Bard and American musicals of the last sixty years whether this just might be too much "inside baseball". Was there for first preview and saw my very first mid first act standing ovation so perhaps there are many like me who fit the two catagories.

Not since the early previews of The Producers have I felt such excitement in a theater. The story is clever and the cast is full of musical theater pros at the top of their game! It's silly and funny and full of big production numbers . Lots of musical theater and Shakespeare jokes. The audience loved it!

Such a fun show!

A really fun musical! Pays homage to nearly every musical of the past 30 years! Great music, fantastically talented cast. Singing, dancing, comedy are all top notch. Brian D'Arcy James & Christan Borle are magical on stage. This is bound to be the hottest new show on Broadway! A must see!!!