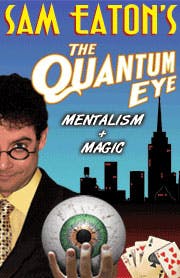 Guild Hall at The Little Church

7 of my girlfriends went to see the 'Quantum Eye' & all 7 of us loved it!!! Sam Eaton is beyond incredible. It's a show for all ages. Don't miss it; you will love it!!

Everything that Carol posted about on 1-8-2011....this show is great fun and can be a great bargain if you book with broadway box at the discounted rates. The show is entertaining for adults and for their children who will pay attention. Not, IMO, suitable for most pre-teens or younger children but I noted several kids in the audience who looked to be maybe 10 yoa and who obviously loved the show. We enjoyed the Snapple Theater venue more just because it was an easy walk from our hotel. As Carol said : this is one of those little things that will make your vacation to NYC something special! Try to splurge on the best seats if you can. Sam selects mostly from these seats for volunteers to go on stage and participate in the tricks. Your kids will thank you! I want to be Sam Eaton when I grow up!

My husband kept on saying "How did he do that?" after every trick. It was a really fun way to have a night out show-and-a-dinner (the show is at 5pm). One of those little things that made our trip to NYC special.

I loved the show! I loved the music! And I loved the message. Sam tells you right from the start that he is not psychic and that everything that you're going to see is deception. As a parent, I really appreciate that, although I wouldn't suggest bringing really young kids because they probably wont follow what's going on. Sam is funny, too. He doesn't make fun of people on stage. You don't have to worry about that. That's important to know because he is constantly pulling up volunteers. Sam just has this subtle sense of humor that makes you crack a smile throughout the show. You have to see it to understand. My only criticism is that the show should be more than just on Saturdays. I think that he has shows on some Tuesdays, but you have to check his website for that schedule. More shows, Sam, more shows!

My family and I had an amazing time! My son was picked for one of the demonstrations and is still trying to figure out how Sam knew exactly what he was thinking. Quite honestly, so am I! We all have different favorites from the show. Mine was the very last trick with the newspaper articles. I can guarantee that we will be seeing Sam's show again as my son and daughter want to bring their friends. I'll bring mine, too.

This is definitely a must-see.

I haven't seen a mentalism show in quite a while. This was very interesting and enjoyable. It is a very different theatre experience in that the audience must actively participate in the show. I found that to be not only exciting but also added a great deal to the overall energy. Sam Eaton is a wonderful performer and does a great job entertaining not only the older folks like myself but also the youngsters as well. We had a fabulous time.

The Quantum Eye is absolutely amazing! Sam Eaton presents a very intelligent and classy show. I thoroughly appreciated that he did not claim to have any special psychic abilities. He tells his audience at the beginning of the show that what we will see is all tricks. He said that, if you're going to take home any message from the show, that you basically open up your mind and question what seems improbable. That is a rule that we should all live by.

A great time for all my friends!

I'm not a huge magic fan, but I am one now!! Thanks to Sam Eaton's show, which amazed me, I can't get enough of mentalism.
I especially appreciate that Sam Eaton made his magic tricks accessible to the public. Usually magicians pretend that no one could ever repeat the tricks they show, but Sam Eaton inspired the audience to believe that they too could do mentalism with some practice.
But despite Sam Eaton's humble front, his tricks were out of this world! In fact, a friend of mine who thought magic was predictable, came out of the show completely surprised by what he saw.
Although Sam Eaton made a point to tell the audience that what he performed was not "magic" it sure seemed like it was to me. I could never repeat any of his "mentalism" with his charisma or ease!

I HIGHLY RECOMMEND THIS SHOW

Sam Eaton's show was thoroughly enjoyable. And my children were entertained for the entire duration. They are still raving about the great time that they had. I would highly recommend that everyone go see The Quantum Eye.

Is it possible to give someone more than 5 stars?

I saw Sam Eaton perform for the first time about a year ago. I was so impressed by him that I hired him for a private party. He did a fabulous job and I highly recommend him. I am thoroughly impressed with every element of his show, from his unique performance style to the originality of his "tricks." On a personal level, Mr. Eaton is such a charming and professional man. Go see his show and have a lovely time!