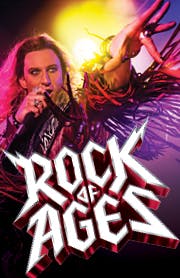 Latest Reviews for Rock of Ages

One of the best on Broadway!

Show was amazing. Music was the best. Ive seen it twice. The first time with Constantine Maroulis and another time. Constantine is great. Im buying tickets now to see it before it closes. So sad

Love, love, love this show! Loved it so much that I just saw it again in Vegas (only 5 months after seeing it on Broadway). I give the Broadway show a perfect 10. Vegas was a respectable 8.....but the Broadway Drew was incredible. I am returning to NYC this November and I just might have to see it again. Loved the music and the comedy!

Leave Granny and the Kiddies at home and be ready to rock!!!

Let me start by saying that parents bringing the kiddies and those over 65 need to avoid this show at all costs. This show is about the 80s and everything "bad" associated with the era. There is drinking, smoking, "bad" language and sexual innuendos. (If you don't know what the word means than get off your butt and look it up!!)

NOTE: Most audience members are in their late 30s, 40s and 50s. This is NOT a show for teenagers or younger children or for uptight adults without a sense of humor!

Now for those of us who are a product of the 1980s be ready to be transported back to "our" time. Yes, the story line is lame to say the least, but, it provides a lot of trips down memory lane and a few good hard laughs along the way. However, without a question this show is about the music, and, you aren't a fan of 80s music then you will hate this show.

Check the set list out BEFORE buying your tickets
"We Built This City" by Starship
"Nothing But a Good Time" by Poison
"Keep On Lovin' You" by REO Speedwagon
"I Wanna Rock" by Twisted Sister
"Too Much Time on My Hands" by Styx
"Renegade" by Styx
"Oh Sherrie" by Steve Perry
"Waiting For a Girl Like You" by Foreigner
"Shadows of the Night" by Pat Benatar
"Don't Stop Believin'" by Journey
"Heaven" by Warrant
"The Search is Over" by Survivor
"High Enough" by Damn Yankees
"The Final Countdown" by Europe
"I Want To Know What Love Is" by Foreigner
"Here I Go Again" by Whitesnake
"To Be With You" by Mr. Big
"Every Rose Has Its Thorn" by Poison
"Can't Fight This Feeling" by REO Speedwagon
"Wanted Dead or Alive" by Bon Jovi
"Cum On Feel the Noize" by Quiet Riot
"Any Way You Want It" by Journey
"Heat of the Moment" by Asia
"Sister Christian" by Night Ranger
"More Than Words" by Extreme

Now after all is said and done. GO SEE THIS SHOW! It's totally awesome :)

I just attended this musical tonight and it rocked! I loved it and so did my 14 year old son! Very much worth the money,and the cast were awesome! 8O) I recommend you see it if you love 80s rock and roll! 8O)

One of the most enjoyable shows on Broadway. I went with my husband and had a blast!

Brilliant, fun and a laugh a minute. This musical rocks!! Grew up in the 80's and just loved it. The cast was spot on, the singing fantastic. I would take my 14 year old to see it - forewarned of course. Have now seen it 4 times. My older girls rock away and just love it. A good fun night had by all. Recommend it!

A good time was had by all

I spent a lot of time in the LA Rock Scene at the end of this era and when I walked into the theater, the set was perfect! The show was funny with great music, great singers and I'm not an Idol fan, but Constatine was great! Isaw 7 show in that week and this was by far the most rowdy. Drinks served by waiters, a concert atmosphere. It a great date night even if your spouse hates "the theater". A must see for rockers who made it through the hair spray fog!

I would see it again and again

Rock of Ages is one of the best broadway musicals I have ever seen. It was upbeat and exciting. The music was awesome and kept you involved the entire time. The cast was very talented! I would 100% recommend seeing this new musical!!

Play was GREAT!!! Story of kids that move to LA to try and make something of themselves, laced in with songs that bring you back to a place in time with bad hair, worst clothes.....but FUN music! Music that took me back to high school, a time of no bills to pay, good times, good friends, and plain innocent FUN!!!
Enjoy.

I liked it.....I really really liked it! Something Different and a Whole Lot of Fun!

Being a chick from the 80s who still totally loves 80s hair bands - it was fun! A real kick. I would highly recommend it to anyone who enjoyed and continues to enjoy the music of our time!!!! Rock On!