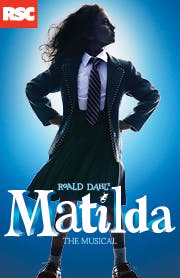 Honestly an inspirational show, I am a 39 year old guy and really was not sure if this would be for me, but at parts it had me tearing up, laughing and cheering, such a great show, When I grow up was incredible.

Third time around at Matilda! It never fails to inspire and move me. One of Broadway's best shows - it's simply beautiful! The original cast - Bertie Carvel, Gabriel Ebert, Lesli Margherita, and Lauren Ward - are something special. I saw Sophia Gennusa twice as Matilda and Oona Laurence once, they are both flawless. The sets, lighting, and costumes are gorgeous. Score is genius.

Let me just begin by saying that my favorite Broadway shows of all time include Les Miz, Rent, Into the Woods, to name a few. In a surprising twist, Matilda the musical became the BEST musical I'd ever seen after only seen the first act! It's also important to point out that I only went to see it because I thought my 13-year old niece would like it. I was expecting a Shrek or Annie type of show. I couldn't had been more pleasantly surprised. It was phenomenal! We saw Milly as Matilda. She was fantastic! Now, I know there are 3 other girls sharing the role, but if any of them are better than Milly then they must be extraordinarily talented. Milly stole my heart the moment she finished her first song "Naughty".

The wow factor behind Matilda is its ability to flawlessly nail every single aspect that makes a musical a remarkable one. Yes, the show is inventive and very original. But the one thing that holds everything together is its book, even more so than its memorable score by the genius Tim Minchin. I was hooked from beginning to end. In a story I thought I knew, I couldn't help but notice the suspense and excitement that each scene, dialogue, and song contributed to the story. Go see this show as soon as you get the chance!

Just saw Matilda this past Wednesday with my wife. The first word that comes to mind is...brilliant. Frequently throughout the show, I said to my wife how does this nine year old possess so much talent? It was the talent of the character playing Matilda on this evening that drove the entire show. The show was creatively scripted, well cast (not an actor on the stage was anything less than brilliant)relevant, funny and delivered a meaningful message at its conclusion. The entire audience, adults, young and old and children loved it. My favorite part was the curtain call when Matilda walked out to take a bow with the gracious maturity of a thirty year old.

Don't wait to see this show which in my personal opinion was in fact the best Musical of the year.

Broadway at its best!!

One of broadway's best musicals, and the best show of the season by far. Everything about it is perfect. Tim Minchin wrote a genius score - listen to it before you see the show and read the lyrics - the songs are very clever.

Best show you can see.

This is the best show I have ever seen and I have seen a lot. It is high energy and the musical's book is wonderful. Every cast member is perfect and the songs will stay in your head for a long time.

Phenomenal show. Staging, music, actors - just a wonderful day at the theater. This show should win every Tony award that it's nominated for. I don't say this for many shows but I'm willing to see it again. That's how much I enjoyed it!