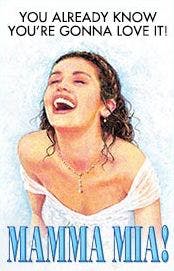 I love how they made an amazing love story go with ABBA music what's there not to love . It'll have you dancing and singing the whole time . As well is a comedy . Family Friendly and a classic musical theatre show .

Mamma Mia is the best musical I've ever seen. From Honey, Honey to Dancing Queen all I did was dance. Took all 3 of my girls and they loved it . We already bought our tickets for the next show.

Mamma Mia, I loved this show!

I went to see this about 8 months ago with my mom. I loved how fun it was! Everything just made me relax and have a good time. I wanted to jump up and sing along with the cast. In movie terms, I would rate this pg-13.

All I can say is high energy and loved it! My husband and I saw it at the Winter Garden this past Saturday and even though he is not an ABBA fan I saw him singing and laughing too.
If you want a happy,feel good...take me back to when we were 17 type of play, then this play might be the ticket. If you're looking for something more dower or stuffy, then go see something else.

I have been going to see Broadway shows for over 30 years. I found Mamma Mia to be a fun, frollicing, entertaining musical! What an energetic group of performers! The cast goes all out to give the audience a feel good experiences that leaves you wanting more! Bravo to everyone involved! Please give us more musicals like this!

A Fantastic show and I am looking forward to seeing it for the 7th time!

I first saw Mamma Mia in Toronto and that is where I fell in love with this show! I have seen it 6 times and I just saw it again on Broadway on July lst. The acting is superb and the music takes all your troubles away! I will see it again as soon as possible. It is a show for all ages whether you are an ABBA fan or not. I have seen a lot of musicals over the years and this is and will always be my number 1!!! I recommend it to anyone who wants to have a great few hours of theater.

The music is great. I remembered it all when it was played. Because the cast changes because of illness, leaves, other commitments, you can't always be sure of who or what you will see. But we saw it three times and enjoyed it each time even though there were different people in roles. At work, a man in the building said he had seen it five time in different cities because he liked it so much. I know what he means.
The music carries the play. I think the writer did a great job to bring the story and music together.
There was one person we particularly liked in a role, he was a stand in for one of the principals.
We wished we would have stood up and danced but were rather shy. But I would urge anyone seeing it, to just stand up and dance at the end of the show. The cast loves it when the audience participates in the music and shares the curtain calls.

A feel good experience, the songs will stay in your heart forever!

saw it several years ago for the first time. Since than I have brought my daughter,daughter-in-law and niece to see the show, they had one of the best times in their lives. Can't wait to see it again. I'm going to bring my husband in Dec. can't wait! A must see if you want to feel like 17 again. This show is so alive with happiness it just wants you to sing and dance..

AWESOME SHOW!!!!
Mamma Mia is the best broadway show I have ever seen! It is a feel good show with ABBA's greatest songs being sung by actors with passion. I saw this show in May 2006 and had to go back in July 2006 to see it again. Can't wait to go back again! I can't get enough!!

A Musical at its BEST

This play is memorable, and you probably will want to see it more than one time! To be able to hear ABBA songs in a story line is exceptionally clever and totally enjoyable. You will not be able to watch this play without tapping your foot at least once.