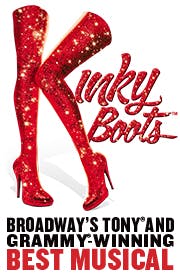 The story of Charlie Price a passionless man desperately trying to separate his own legacy from that left behind by his late father while simultaneously trying to fill his shoes- meets a drag queen, Lola, who struts her way into Charlie’s life and inspires a new kind of footwear in an attempt to save the Price & Sons. Shoe factory. Kinky Boots is an incredible 6x Tony Award winning broadway show that I had to see a second time. It’s no secret that Brendon Urie is my favorite singer. An artist from whom I draw much inspiration and admire dearly. I made my way to the Al Hirshfield theatre to catch His debut performance and I was not disappointed. He was funny, he was shy, he was passionate, he knew when to be quiet. The dancing was wonderful, he kept up and never skipped a beat. Something else to note about the performance is that while Urie is a member of mainstream music, his voice was quite adapted for broadway. The musical didn’t sound like a Panic! at the Disco song. It wasn’t distracting. It was a heartfelt and triumphant debut and it’s easy to tell that he is having the time of his life up there. Bravo to Brendon Urie for a successful Dream come true and I am excited to see what he does next! If you can get out to see Kinky Boots before August 6th do yourself the favor! Treat yourself and let the cast raise you up!

SUCH a joyous show!

I saw KB last Tuesday night and you would have thought it was a weekend show with celebrities in the audience! Those actors gave us as much as humanly possible. Todrick Hall is, of course, amazing, but Haven Burton was the stand out for me. She was funny and sexy and just amazing! I cried at the end of the show and I walked out of the Al Hirschfield Theatre like I was the one wearing kinky boots. The final number is so uplifting, so joyous... it's a night I won't soon forget!

Todrick Hall is fabulous as Lola

My daughter and I were there for Todrick's opening night as Lola. It was a first Broadway experience for both of us, and we're already planning our return trip to see it. The entire cast was amazing, but Todrick owned the show. We've seen him in Straight Outta Oz, so I knew he could sing and dance, but I was blown away by his acting; he was absolutely brilliant. I love Lola. He got a long, well-deserved standing ovation for "Hold Me In Your Heart"...I get chills just thinking about it. Go see this show. Bring your kids. It is such a heartwarming and uplifting story.

I would recommend this for all ages. The message delivered is important but the best part of the show is Billy Porter's singing and the great music and songs. It was funny, intense, sad, and overall a wonderful Broadway experience. For the hetero crowd, don't let the fact that it is about boots for drag queens turn you off. There is plenty of great humor and fun for everyone. If you have never seen Billy Porter perform, he was simply wonderful and deserved his Tony Award. I would recommend it to anyone if you want a great show and leave feeling great.

A Memorable Way to Begin a New Year!

I had the great pleasure to see "Kinky Boots" in NYC on new year day (1/1/2015). It was so much fun. I was very impressed by Mr Timothy Ware's rocking performance as "Lola." He nailed it.

I was actually in town to watch my two alma maters play football against each other (Rutgers-Wisconsin) ... but for a precursor headed into Manhattan to see a show and have a wonderful dinner. With no expectations we all ventured in the Hirschfield Theatre to immediately find out (much to our chagrin) that Billy Porter is a "no show". And yet that's when the fun began ... my goodness ... what a pleasant surprise to witness the likes of TIMOTHY WARE .... I have seen 100s of shows in my 68 years .... but Timothy ... you will always be remembered. Halloween in "the Big Apple" and a performance of a lifetime. Kudos are in order ... as what you did on October 31st, 2014 was splendid beyond words. You bring a new meaning to the words "Broadway Musical" .... and as you yourself quoted, "Just continue to be yourself, because everyone else is taken (and there aren't many who can come close to what you do). As a final note, anyone I meet interested in drama as a career ... I will be encouraging them to attend Alabama State ... for there must be something there that is wonderful in the water.

When entering the thereafter last week I was disappointed to notice that Billy Porter was out and Timothy Ware would fill his role. We traveled from Missouri to see Mr. Porter's performance. By the time Mr. Ware sang the sex is in the heel, I was all in. His was a tour-de-force performance. His LOLA was bold and strong, while his Simon allowed the audience to empathize with his challenges as a child and adult! The rest of the cast was also first rate. The score knocks you through the back of the theater. The costumes and sets scream big budget musical. Loved Kinky Boots and Timothy Ware has a new fan! Thanks to all at the Hirschfeld for a great afternoon of theater!

Kinky Boots, a must see musical

I bring groups to Broadway several times a year, seeing mostly
musicals. Kinky Boots for exceptional, fun, colorful and soooo creative. The cage in the center of the stage was phenomenal, designed by a genius. And the songs sung by Billy Porter, awesome in delivery and scoring. Loved the play.

Amazing and really fun. Get out of your seat and cheer and laugh all night. A must see show in NYC!

great show !great story!great cast. i can't wait too see it again. i advise you too get tickets well in advance as i am sure it will be on Broadway for a long time, playing before sold out audiences.