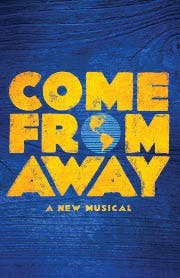 Come From Away Reviews

Latest Reviews for Come From Away

The music was great!! the actors/characters town and people thereof very kind and good! A Spiritual topic as well it took me back too that day. It's a perfect time for such a heart wrenching topic, you left feeling upbeat and HAPPY. I want to go again, wish me luck... Thank you for writing this play!! ; )

How can a show that remembers the events of September 11th put a smile on your face? By reminding us of the best in humanity that arose from the dark circumstances- the kindness, the love, the support of strangers, who saw a need and reached out to fill it. This is a beautiful show that brought brought both tears to my eyes and a smile to my face - I left the theater thoroughly uplifted. The music is wonderful (very talented musicians) and the case is very talented. GO SEE THIS SHOW! You will not be disappointed. The standing ovations are deserved.

My mother and my aunts immigrated to NYC from Torbay South, Newfoundland in the 1940's. I have heard all the tales of the townsfolk and the sometimes unkind climate. This musical brought back all of those storytelling moments and the feelings of the joy of hard working, trusting and a unchanged wonderful blend of characters living each day in a giving nature. The cod kissing, the lively tavern music, the dancing, singing and just simple fun left you with a upbeat feeling as you hesitatingly headed for the door. I recommend this production for all.

The window God Opened when terrorists closed the door.

We were fortunate to learn about CFA via an e-mail from Great Big Sea's website (@BobHallett of GBS is the Newfoundland Music Consultant to CFA.) They had extended the run in La Jolla to the weekend we happened to be flying out West to see our kids. We've seen Come From Away twice, so far. 12 July 2015 @LJPlayhouse in La Jolla, CA and 10 Sept 2016 @Ford'sTheatre in Washington, DC. We also have tickets to celebrate our 39th anniversary on 6/3 and 6/4 on our maiden trip to NYC and Broadway. I wanted to see them in Toronto, too, but my wife doesn't have her passport. Yes, as others have testified, it is THAT good. Come From Away is 100 minutes of tightly choreographed drama that will have you laughing your backside off one moment and crying the next. (Like instructions on your shampoo bottle - Lather, Rinse, REPEAT - you will be doing this throughout the performance). If you've seen the tweets, you've read about the standing ovations - at EVERY performance. The audiences LEAP to their feet the moment the play concludes and continue to applaud through the "exit" music - yeah, that's what the "kitchen party" music was supposed to be - but we all decided to stay for the rest of the party and the musicians' time at center stage instead of behind the trees. If you'd like to see the back story that is the people of Gander, Tom Brokaw did a human interest special for the Vancouver Olympics. It's on You Tube. https://www.youtube.com/watch?v=jXbxoy4Mges&t=40s If you'd like to read a bit more, Kevin Tuerff (the real life person Chad Kimball protrays) has written a paperback called Channel of Peace. https://twitter.com/channelof_peace If you'd like to hear more Newfoundland Celtic Rock, check out Great Big Sea. The Cast, Musicians, Crew bring us a truly magnificent gift with every performance. Once is definitely not enough.

A view "from Away"

I'm from Canada. Should I be biased? Maybe, but some things come to play. I see a lot of Broadway shows in NY as well as London's West End. I will therefore be more critical , as I would be ticked off if this was not a good play representative of a Canadian production . Second of all , the Newfie accent is very particular and if you do try to imitate it, it better be spot on. The music is typical of Newfoundland as many there are descended from Ireland. The bumour in this play is also characteristic to Newfoundland . The pace of this place is perfect and the ensemble cast is top notch. One of the actors was the male lead for the TONY Award winning best musical Memphis, so I know he would be good, but this is a true ensemble cast and they all are wonderful . It is very upbeat with absolutely zero sad moments, so if you need to cry, it's for joy. i missed the extended run in Toronto.it was sold out. On a Saturday night in NY, the theatre was standing room only and when the show hit the last note, the crowd all stood up and shouted owed by clapping to the post show musical jig.

This wonderful musical is a tribute to the magic of the theater. The stage setting was simple but powerful. The costuming was what everyday people might wear everyday. There were no tricks in the staging, no pretense about making this into an overpowering Broadway blockbuster! And it worked. The story is compelling, the cast is great, the characters are fully realized, the music lifts the soul, and you leave the theater with a lift in your step and a new appreciation for the best in humanity. Wow! How often do you get all of this for the price of a theater ticket?

6 girlfriends that see broadway shows regularly were just blown away.Creative delightful new musical staring a dozen unknown talented performers. Everything about this show will make it this seasons big hit. Not to be missed.

Come from Away is a production with no major stars, no popular music, and no dysfunctional families. It takes the audience back to the darkest day in American history—9/11/2001 when 38 planes were diverted from their routes to Gander, Newfoundland Airport in Canada. Seven thousand passengers were kept in the dark about the attacks on the United States and the ban on air travel in the country. The story relates how this tiny town and its neighboring villages mobilized to feed, house, and entertain the stranded travelers for five days. From the 1940s until the 1960s Gander had been the largest air base in Canada for refueling transatlantic flights to Europe.  The friendships that were forged resulted in alliances between people from all over the world, reunions with the Canadians, a marriage, and scholarship funds. The rousing Irish tunes and the high energy and enthusiasm of the cast make this the new feel-good play of the season. It’s a winner.

A Show Trump Needs to See

Within thirty seconds of the opening number I was unabashedly crying and laughing. This continued for the entire 100 minutes of the show. Put aside the great storytelling, the wonderful music, the nuanced skills of consummate actors to touch the mind, heart and soul. This is a story of how we should treat those who "come from away." Not with body-armored ICE agents, useless walls and the thinly veiled hate-filled, fear-driven rhetoric of exclusion. But with the openness and inclusion of those Newfoundlanders who truly followed the dictate to do onto others ... And they who asked for nothing were paid back a hundred-fold. I am going to send the Donald a ticket. He needs to see a this show.

The antidote to current White House actions, this exhilarating play reminds us what happens when a community rallies around strangers in need---the 7000 diverted airline passengers on 9/11 who were embraced by the residents of Gander Newfoundland for five days. This outstanding ensemble piece created such positive emotions, the audience stood as one as the curtain fell, exploding in applause and cheers. A play that makes you feel good about unselfish displays of human behavior during the most significant tragedy and how the spirit of a community translated expertly in a 100 minute musical with unabashed energy makes you feel great again. Highly recommended.