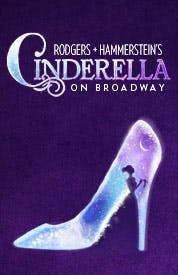 Wonderful show with that glorious Rodgers and Hammerstein music/lyrics. The show differs some from the two TV versions but the differences add to the magic and fun of this show. Laura Osnes and Victoria Clark give amazing, heartfelt performances. Unfortunately, Santino Fontana was on vacation and we missed that soaring tenor and twinkle in his eye that his understudy lacked. The stepsisters and stepmother were terrific. The choreography was breath-taking and the orchestra was superb. This show is a must see for the entire family.

Went to the show ...ok...I know the story ...left with WOW!!!! Everyone should see this show. NOT what you expect yet everything you thought.

This show is Broadway as it used to be--muscials that are magical, hummable and gorgeous to look at. When was the last time a musical had a full 21-piece orchestra? The songs are pure Rodgers and Hammerstein-tuneful and heartfelt, not the pop junk that passes for music on Broadway these days. The costumes are beautiful, and the leads are wonderful: Laura Osnes' voice is pure and sweet, and Santino Fontana is adorable and charming.
It amazes me that people who didn't like the updated story gave this a "Don't Go", as if there was nothing else to love in this show.
How refreshing to see a musical that doesn't depend on projections, as recent shows have done, but instead gives us an old-fashioned night of magic. Wonderful for everyone, with or without children.

Broadway at its stunning best

The designers for this production should be commended for coming together to create such a visually stunning experience for audiences. Add to that a uniformly stellar cast, an intuitive director and a new smart and funny book by Douglas Carter Beane. Mr. Beane has creatively used the classic Charles Perrault version of the story as inspiration for his script. The new lush orchestrations from the full pit orchestra (now a rarity on Broadway) are exciting, especially so in the gorgeous and perfectly choreographed waltz sequence. It was gratifying leaving the theatre amidst a crowd of exuberant audience members who were obviously as satisfied and happy as I was.

My wife and I took two of our granddaughters (age 5 and 7) to their first Broadway show. Cinderella was a perfect choice. The two girls totally enjoyed themselves and we could find no negatives in the experience they received. The music,sets,lighting and costumes were extraordinary. I did not particularly like the political comments about society and income distribution. My wife thought it was good and different.

I still would recommend Cinderella for a adult(without children present ) very good experience, but we thought it was fantastic for children and adults together.

Totally Enchanting--What a Broadway show should be

Enchanting, sparkling and wonderful with an amazing cast and the best ensemble on Broadway.

We planned this outing for five female family members. We had a wonderful time. I read most of the original fairy tales as a child, so I knew most as dark stories. We've been spoiled by "Disneyfication" I have always loved the Rogers and Hammerstein version, saw it with Lesley Ann Warren. My daughter played the wicked stepmother in high school, so I worked on make up and costumes and sat through weeks of rehearsals. I actually enjoyed the newly revised second act. It was surprising, funny and ironic. I love that we don't have to teach our daughters to depend on a prince. They can hold their own opinions, beliefs, a job. Life is different now and this production was magical.

How a broadway musical should be!

There's something about this show that works. Is it the production? The music? The actors? I think it's all of the above. All of the actors are top tier and make the new book work like a charm. The songs are memorable and will leave you humming for weeks. The new book which is the Cinderella story with a new twist is very well done and it's very funny. Props to Douglas Carter Beane. The production and how the transformations are the best part of the show and worth the ticket price alone. I loved this show and I hope everyone sees it for what it is and they will really like it. Go see this show!

We had a wonderful time. Took our 9 year old granddaughter who is still enthusiastically talking about it to us and her friends. Stellar performances from a terrific cast. Visually stunning costumes, set, lighting. It's still in previews so there will be some revisions, nips and tucks. Loved the full orchestra (unusual now on Broadway) and the newly revamped, lush orchestrations. Yes, the script has been changed and songs from the R&H trunk have been added. All the wonderful original songs are still intact. Those who will be disappointed that the story isn't the same as the original need to do their homework before attending this or any show. This is no secret and there is endless information about this available. I'm reminded of those who were horrified that Mary Poppins, the musical, wasn't the same as the movie. It offered a darker side as in the original story. I would imagine that many children (and adults) will not have seen any previous productions of this so won't be offended and disappointed because it's not the same. They'll have nothing to compare it too. Hopefully it will be a new and engaging experience for them and for most all of us. Of course, as with anything, there will be widely varying opinions. For us, this was a winner and we plan on taking other family members. Looking forward to experiencing it once again.