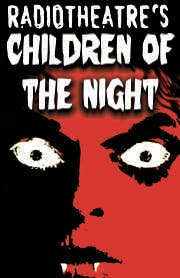 Radiotheatre's Children of the Night Tickets

Discount Offers on Radiotheatre's Children of the Night Tickets

Sorry, this show has closed.

About Radiotheatre's Children of the Night - Off Broadway

WILL YOU DARE TO CELEBRATE THE HIGH HOLY DAYS OF HALLOWEEN WITH RADIOTHEATRE? Come in! Enter 200 yrs old St.John's Sanctuary in historic Greenwich Village, NYC where amidst the fog and candlelight, the award-winning (20 noms, 4 wins NY Innovative Theatre Awards; Best Performance Group 5 times! Drama Desk Award nom) and critically acclaimed RADIOTHEATRE (see below) will once again present for the 16th season its annual HALLOWEEN FESTIVAL! Complete with a great cast of storytellers, original orchestral scores and a plethora of sound FX! This year's offering...

For complete Repertory schedule: www.radiotheatrenyc.com
DRACULA'S GUESTS - Bram Stoker's tale of a young couple who inadvertently fall under the spell of the Count, himself!

CARMILLA - J.Sheridan LeFanu's classic story of a lonely girl who becomes infatuated with a mysterious female stranger! Adapted many times in various media, this 1872 vampire tale not only predates DRACULA by 26 yrs but it is the first Lesbian Vampire story!

HE - by H.P. Lovecraft. A man wandering the back alleys of old Greenwich Village one night meets a weird guy who seems to belong to a bygone era. One of the few stories Lovecraft wrote while living for a brief time in Brooklyn! PS - He hated NYC.

GABRIELA - A man finds a beautiful naked woman in the forest. Yeah, so? Well, he's gay and she's....? From a tale by Saki.

MRS. AMWORTH - Is the new neighbor a vampire? A horror staple by E.F.Benson included in hundreds of anthologies.

THE TOMB OF SARAH - A construction crew opens an old tomb in the crypt beneath St.John's Sanctuary!

CROGLIN HOUSE - based on fact, this famous tale is about a young couple who move into an old house...that is haunted by a vampire, of course!

THE HORROR FROM THE MOUND - two farmers out west must combat a vampiric demon in Robert E.Howard's classic yarn.

FOUR WOODEN STAKES - a young man seeks to discover the reason why his family is dying before it is too late!

THE SUMACH - when their dog goes missing, two women learn that the red sumach tree on their property is not just a tree. FOR THE BLOOD IS THE LIFE - while on tour in Italy, a couple is haunted by an ancient bloodsucking spirit!

THE VAMPIRE MAID - a hiker stops off at an old house for a rest, but the landlady's daughter has other plans for him.