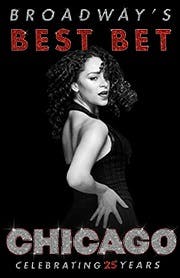 If you're going to this show to see the movie - don't bother. BUT if you want to see a GREAT rendition of the story superbly sung, wonderfully acted with a cast that's having an absolute BLAST performing for you - don't miss it.

I thought it was funny, the entire cast was outstanding and having the orchestra on stage and the performers playing multiple characters pure genius (keep your eye on the jury during Roxie's "trial"). It all made for a fast-paced show which was wonderfully delivered.

I've directed over fifty shows, about fifteen of them musicals, and I thought the performance was well worth the money. A do NOT miss!

One of a Kind.

Chicago: The Musical is a production in which Bertolt Brecht and Bob Fosse go hand in hand.
There is little set and few costume changes, but every little detail counts. Brecht believed a chair is just a chair, it's how you use it that changes it. The orchestra are placed on-stage in a tiered structure so that the audience can see the musical talent as well as the acting performances. The performers use the space of the orchestra well and interact with them in a very Brechtian way, reminding the audience that this is a show.

The Choreography by Ann Reinking in the style of Bob Fosse is flawless and when performed correctly - mesmerising. With the 'Hot Honey Rag' keeping the original Fosse choreography, giving fans a kick right at the end of the show. One goes to see this show for the dance, music and performances, for certain.

The songs are catchy, exciting and varied, often leaving an audience member singing along and gasping at the vocals of somne performers.

The costuming is typically simplistic and Brechtian. All in blacks, the chorus/ensemble dancers are sassy, sexy and often stunningly gorgeous. With as little as 2 costume changes for characters Velma Kelly and Roxie Hart, the significance of the costumes is the real eye catcher, like the notorious "silver shoes with rhinestone buckles".

The most tricky part to criticise of this production is, indeed, the performances. Often, the performers are greatly talented and will leave one speechless. The actress of Velma Kelly must be a professional dancer in order to fit the role, so will often have a certain amount of talent to work with, and actresses like Amra-Faye Wright often make the character amusing, empathetic and an audience member can tell that Wright is enjoying herself onstage, so Velma then has a certain amount of sparkle.
The character of Roxie Hart is the most complex in the whole play, however the performer of this role will have an easier time portraying her, due to her lacking in dances and less charged, active and even vocal numbers. Roxie is more often portrayed by the 'guest star' while Velma is played by the professional dancer. The performers in the role can be very hit and miss however. I saw Sarah Soetaert play the role excellently in the West End, and she truly deserves a move to Broadway, since she captured the essence of Roxie perfectly, and mananaged to make the character more likeable. Model Christie Brinkley (until April 27) however, was a shambles. Her vocals raspy and croaky, her performance very one dimensional and singing lazy, leaving the big songs that Roxie has, merely to the imagination and she sang so quietly, the orchestra overshadowed her.
The characters of Billy Flynn and Amos Hart are complete contrasted opposites of each other and actors often put their own stamp on the characters, for example Raymond Bokhour (currently on Broadway), who puts a camp edge onto the character of Amos. Equally currently Mama Morton Actress, Carol Woods' vocals are spine tingling and put an audience to silence until she is finished singing when the whooping and cheering starts; an effect which is a true achievement.
Special mention must go to R.Lowe who is experiencing a Broadway Debut and provides spectacular vocals and a shocking performance for a first timer, the very best Mary Sunshine I have ever seen.

To conclude, avid theatre goers must see this fantastic show, put together wonderfully by the late, great Bob Fosse and experience a little 'Razzle Dazzle'. Suitable for absolutely anyone (with only few occaisions of cursing and innuendos that younger audiences wouldn't understand) The songs alone by John Kander and Fred Ebb are enough to give anyone reason to enjoy this show!

Not a Broadway Snob - I saw a great Show

I saw the show the day before Mothers Day and I loved the energy and the talented actors and musicians. Seeing the band positioned on stage was fun and played in with the story really well. The dancing was crisp, sharp and well choreographed. The cast was talented and beautiful in that Chicago sort of way. This version was innovative yet true to the story. I found all of the actors to be very talented vocally, physically and theatrically. Dancing and singing numbers were delivered without a hitch! Velma was perfect and a edgy in a good way. Roxie was beautiful and also able to deliver the many facets of her character. Amos was funny and "stole" the show. The lawyer was cast perfectly and he has a seriously great voice. I am so glad I saw this show. Remember its not who counts, the credit goes to those on stage and backstage who put this show together. I'd see it several more times if I had the time.

Loved the Show!!! Michelle Williams was a little disappointing since she could not dance as good as she can sing. Velma's dancing and the rest of the cast just put her away. Entertaining ALL THE WAY!!!. Would recommend highly!

I saw the Sunday matinee show. Excellent show. Songs were well executed and every cast membe fit the role. The story also moved along well. Worth the money, especially for discounted prices offered by Broadway Box. It was unusual to be able to see the band during the whole show, but it seemed to be a plus. It was nice afterwards to see each cast member introduced by name at the end of the show. Tom Wopat's performance stood out to me the most, but everyone was excellent.

I can't believe what I'm reading in the some of the reviews here.. did you watch it with your eyes closed and listen with large pieces of popcorn in your ears?! I've seen this twice now on Broadway - once in 2006, again in September 2008 (when Roxy was the best I ever ever witnessed!), and am going again with a friend on 1st May. I absolutely love it. I smile ALL the way through, I love the music, the energy, the orchestra, everything! And the simple setting is there for a reason - it WORKS! Lighting and sound - fantastic. Go! I can't wait to see it again.

What a Fantastic Surprise!

Wow! I had seats all the way over BUT it didn't matter. This show was refreshingly fantastic! I only knew of the movie and having had my fill of it, I was too thrilled about going to see this show but I was TOTALLY wrong. There is so much energy in this show that it just rolls off the stage and envelops you. Great staging!!

Would see this over and over again!

My daughter and I went to NY for her senior trip and was lucky enough to see Chicago. We absolutely loved it! The dancing, singing, acting was excellent. Roxy has the best comedic timing since Lucille Ball! I could watch this over and over again. It was definitely what I had hoped a Broadway show would be! We sat in the front Mezzanine row A and I don't think there could have been any better seats in the entire place! I recommend it for anyone ages 16 and up (due to content) who loves drama/comedy/choreography/music!

This show is a Broadway classic. The dancing and music are amazing, and the minimalist set enable you to focus mostly on the actor's movements and the orchestra's music. The actors are sexy, talented, athletic, and energetic. The music is infectious. I like this show more and more every time i see it.