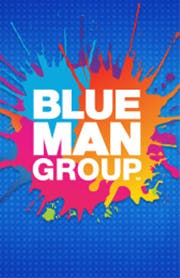 a group of us attended the Blue Man Group performance tonight. We laughed often, enjoyed the audience participation and the facial expressions of the three blue men. Some of the scenes were repetitive. 30% of the show is new, using cell phone and internet search episodes.
if you wish to spend a light amusing night especially with guests who do not master the English languauge, this is a good choice.

Great show. Would recommend everyone to see it.

Blue Man Group will blow you away. With three interesting, emotionless blue characters, loads of cool effects, and some awesome music, you get your money's worth. There is loads of comedy throughout the show. The talent required of the three only performers is impressive, needing skills in acting, and percussion. The audience interaction is a blast. The toilet paper grande finale is easily the most exciting part of the show, using the stobe lights very well. I believe that this show is enjoyable whether you be 6 years old, or 86 years old! Great fun for everyone.

I LOVED the show. The music was incredible! Great audience interaction. This show is for all ages. I would highly recommend this show to all and would see this again! Didn't want it to end,,,,,

A very entertaining evening, especially if you are sitting in the "Poncho" area. Money well spent !!! We were smiling and laughing the whole way home !

Top 3 of all time

One of the best shows I have ever seen, It creates memories that last.

The other reviews seem to be from Broadway fans. This is a show for people who don't really like Broadway shows too much. The music is amazing, the special effects are fun.
This is performance art at its best, not meant to compete with Broadway, this is a different genre.

If you like art and music, Blue Man Group will blow you away. Not a great show for people looking for a traditional show!

Blue Man Group
Discount up to 40%