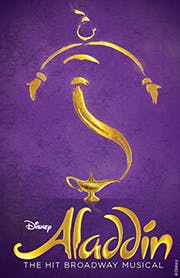 Just returned from Amsterdam Theater watching the performance of Aladdin today. Incredible performance. I came in slightly pessimistic how the Genie could possibly compete with Robin Williams. That doubt was erased in the first minute of performance. The Genie was awesome and a vocal star (his dancing was great too). The Genie, Jafar, and Lago were the superstars. Lago definitely made me forget that he was a bird in the movie. Great and very funny. Costume design was mind boggling with excellent sparkles placement on almost every single pseudo Arabian costume. Musical scenes and dances were excellent. The added tidbits of let's make a deal door selections and other Disney songs were humorous. The live orchestra performance was in sync, on point and incredible. The very, very good sound system was amazing. Definitely a very worthwhile enjoyable five star performance.

Astonishing.... words cannot describe it. The booming voices and vibrant colors bring this Disney classic to life. Be drawn into the streets of Agrabah. The cast is amazing -- led by Jafar himself, Jonathan Freeman. Bring the family, sit back, relax. This show is for the kid in all of us. Enjoy!

What a fabulous birthday present! An extravagant feast for your senses right in the heart of London West End...my wish came true! Thank you Genie

We got tickets for Aladdin only because of the amazing performance of James Monroe Iglehart as the genie, which we saw on the Tony Awards. He did not disappoint last night. This is a colorful, high-energy show with lots of dancing (think whirling dervishes with scarves) and some acrobatics. It’s a good show to introduce children to the spectacle of Broadway theatre despite the simplistic moral: “Be yourself and don’t lie.” Okay, we got that. Nevertheless, the show was an entertaining piece when I wasn’t asleep during the contrived plot during Act I.

Aladdin is a "Disney-fied" spectacular show that has great orchestration, choreography, singing, songs, and a great cast. Genie is amazing, but so is everyone else. Of particular note are the sets and special effects which are breathtaking. Let's just say "The Mouse" knows how to put on a show. "Never Had a Friend Like Me" is worth the price of admission alone. "A Whole New World" was incredible. If you've seen the movie, you know the story is a little fluffy, which keeps it from being the perfect musical. But, overall, Aladdin rates up there, or even higher, with BATB, another exceptional show.

JUST SAW ALADDIN LAST NIGHT, THE MOST ENTERTAINING, COLORFUL, FUNNY, GLAMOUROUS ,( NEVER DULL) SHOW MY GROUP HAS EVER SEEN. IT IS NOT JUST A KIDS SHOW, IT IS FANTASTIC AND FOR EVERYONE!!! GET TICKETS FAST, EVERYNIGHT IS SOLD OUT, YOU WON'T BE DISSAPOINTED

Aladdin was a fun night at the theater. Did it nourish the soul, no! But, I enjoyed the music, sets, costumes and the genie. In addition, it was refreshing to see a multi-ethnic cast. Of course, the Disney effects were supberb-the flying carpet without visible wires (unlike Spiderman's clunky contraptions) and the cave where Aladdin finds the lamp is a visual feast. The actress who played Jasmine seemed to be struggling with a cold, and her vocals were not that great-but overall the cast was good. As for Disney on Broadway, I still prefer Mary Poppins and Beauty and the Beast but I would recommended Aladdin for all ages.

everyone do yourself a favor and go see Aladdin on Broadway!

From beginning to end I was mesmerized. Let’s start with the curtain: Holy crap. It looked like it was made from a rug…absolutely beautiful. The overture began and I was speechless and tears were streaming down my face (Aladdin is pretty much my favorite thing Disney). The entire first act just had my jaw dropping. From the visual effects to the GORGEOUS costumes I was in awe. The new music that was added in like “Proud of Your Boy” (tear jerker for me) and the new duet “A Million Miles Away” fit in perfectly into the story. I also fell in love with Jasmine’s song, I think it’s called “These Palace Walls”. Her song gave her more depth and made everyone sympathize with her (Courtney Reed plays her beautifully). Adam Jacobs is the perfect amount of hunk and boyish charm that Aladdin needs to be. His voice is incredible and his chemistry between Jasmine and the Genie is impeccable. THE GENIE. Oh lord, if this man doesn’t win the Tony for best featured actor I don’t know what theatre is anymore! From the moment JMI came on stage the audience erupted. “Friend Like Me” was a literal showstopper, causing the entire theatre to stand on their feet to the casts complete shock. The second act was just as amazing. “Prince Ali” had everyone dancing in their seats with the all new jazzed up version. Oh and Jafar (played by the actual movie Jafar) was just a complete childhood dream coming true. Okay now onto the burning question of the carpet and “A Whole New World”: PHENOMENAL. I could’ve sworn that the carpet was actually flying because Disney did such a good job. Aladdin and Jasmine sang the song beautifully and the set was perfection. Despite reviews saying the ending was rushed, I felt like that was the only way they could have done the ending in my opinion, without it running for three hours! The finale made me cry yet again from the casts perfection and let me tell you: THE END IS WORTH THE TICKET ALONE. MY HEART. For me personally, this show gets a 5/5 stars. It was non-stop fun and my family still cannot stop talking about how great it was. I definitely will be seeing it again in the future!

Overall the show was amazing. "Friend Like Me" was the best performance of any Broadway Show. The Genie & Aladdin were amazing. The ending was a little rushed and wasn't touching. I was expecting another "Friend Like Me" performance for the ending of the show. "A whole new world" scene was fantastic. Great Job. I will be back to see this show.. It is a must see.