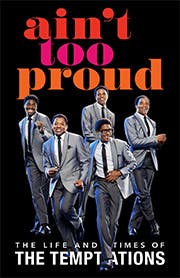 Latest Reviews for Ain't Too Proud

Music brings back so many memories, cast is wonderful, dancing is the best, it is one of best on Broadway and will be there for years. Have seen it twice will go again , it does not get old

This musical was so entertaining from the beginning to the end. This is a musical that leaves you speechless. It is one of the best shows that I have seen in years. Don't second guess yourself and get tickets to this show.

I have seen it twice. Since I expect it to have a long run will most likely see it again at some point. What a story it tells, the music is the music I loved. It really follows the book and movie. Not to be missed and should have gotten more awards .

No wonder that Sergio Trujillo won his Tony for choreography— it is spot on! The entire production is just outstanding, with amazing performances by the energetic, soulful cast. And then, of course, there’s the timeless and unforgettable music! You’ll be dancing and singing in your seat! I can’t wait to see it again! Just a spectacular show overall. Make sure to see it soon with the original cast- they are truly gifted!

Got to see it again and again

I loved this play from the moment the curtain went up. I was seated with a group of high school students and they were so into it , they made not a peep. It was a 1st play for them, great choice. It moves right along with a song here and there, it is a group from my generation. I had seen them at the Copa years ago and they were at the top of their game. . Their story from rags to riches is wonderful. I hope you take home all of the 12 awards you are nominated for. I saw you in April and will be back in July same seat.

THE OBAMAS MUST SEE

This should be seen by All, especially those from THE TEMPTATIONS era, this darn show is the Shhhhhhh!!!!!!!! President Obama this is absolutely a date night for you and our American First Lady Michelle Obama!!!!!!!!!!!!!!! You will sooo enjoy this, I saw this on Saturday, April 20, 2019!!!! I am trying to get tickets to go and see it again, it is everything and I mean everything! A definite must see, With 10 million stars⭐️⭐️⭐️⭐️⭐️⭐️⭐️⭐️⭐️⭐️

Ain’t Too Proud is another jukebox biography following in the footsteps of Jersey Boys, Beautiful, Summer, and the Cher Show. However, as derivative as the play is of its predecessors, one never tires hearing classic Motown at its best. Derrick Baskin as Otis Williams, the founder of the group, begins life serving time in a Detroit reformatory for gambling and petty theft and narrates the rise and fall of the original five members as well as their replacements. Williams realizes early on that he will never go back to a life of crime because he loves music and wants to sing much as the Cadillacs do. The setting is Detroit in the early 1960’s, and Motown is seeking talent, which the Temptations deliver through their songs and their moves brilliantly choreographed by Sergio Trujillo. The play takes the audience through the glory days of the group and the ultimate disintegration of its continuity because of ego, drugs, and illness until Williams is the last man standing. The show also touches on the weaknesses of its members as assault and disrespect or neglect of women play a tragic leitmotif in David Ruffin’s (Efrain Sykes) and Otis Williams’ lives. Thirty-one hit songs are performed by the original and subsequent group members from cross-over dance music to the political themes of the late 1960’s. The audience learns at the end of the play that although there have been 24 Temptations replacing the original five, and the dialogue states, “Sometimes Temp stood for temporary.” The interchangeability (and expendability) is performed against an ever-moving assembly line of cities and venues throughout the world leaving Williams’ personal life in shreds. His wife Josephine portrayed by Rashidra Scott was the weakest link in the play. Her dialogue was nearly unintelligible, and we were sitting in the second-row center. Once again this is the fault of the director Des McAnuff. It was not until Scott began to sing that I understood why she was cast in the play at all. The other females in the Supremes led by Candice Marie Woods was a perfect imitation of Diana Ross. Paul Tazwell’s costumes were gorgeous reflecting the time period. The staging with its moving platforms like the conveyor belts in the auto industry take people off into the wings as they fall by the wayside. The talented singers and dancers in the play make for a dynamic evening from Ephraim Sykes as David Ruffin, bass Jawan M. Jackson as Melvin Franklin, and sweet baritone James Harkness as Paul Williams. The play is a hit!

The Original Temptations were a one-of-a-kind force to be reckoned with. This production does the group justice in portraying their dynamics. Along with the top ten hits and slick performances however is a story of survival, love & loss, achievement and the trappings of success. Although four of the original members have departed, their music will never die. Multi-racial audience members in my sitting area all related to the times and turmoil of that period. We discussed it during the intermission. The young actors did a fine job in their performances, especially noteworthy was Derrick Baskin as Otis Williams, Jeremy Pop as Eddie Kendricks and Ephraim Sykes as David Ruffin. We loved the production and would see it again.

Should be very proud!!

enjoyed every BIT of the show!! The cast was really talented, what singing and dancing, total HIT!!! I laughed , an yes even shed a tear. T O N Y .......uh huh