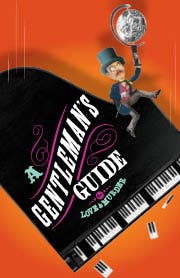 A Gentleman's Guide to Love and Murder Reviews

Latest Reviews for A Gentleman's Guide to Love and Murder

Highly recommended. I loved the show and was entertained for the entire length of the play. It has great music and the choreography is clever, original and fun to watch. I also loved the music and lyrics as much as the voices of the main characters. I would see it again and again. Highly recommended.

Truly a class-act of a musical and one of, if not THE, best production on Broadway right now. I found everything from the cast to the book and the score and the direction and the costumes to be sublime. I think the only real shame is that Jefferson Mays or Bryce Pinkham didn't win the Tony this year and that Lisa O'Hare was snubbed when she should have won Featured Actress.

I totally agree that this was the best show of the 2013-14 season. Such a delight in every way: adorable premise, witty lyrics, catchy score, fabulous characters and wonderful performances!

The energy, the writing of this play kept going past the end of the show. A must see more than once

TOO GOOD FOR THE AVERAGE MAN

This is a superb new musical up there with the best that Broadway ever did. But wait - there is no rock score, it doesn't have a leading man from TV, and it isn't a recycled movie. How will the average man ever get it? Hopefully a lot will, to encourage the writers, and the director - very clever men - to do more.

Though generally not a fan of farces, this one had great appeal. The cast worked very well together in a show that required excellent timing. I had never seen Bryce Pinkham on stage before and found him to be my absolute favorite. He was funny and sympathetic despite committing eight murders by the end of the show. Light, fun fare.

A Killer Cast Delivers a Fun Afternoon of Theater

This was the most fun I've had at the theater in many years. A smart script, clever lyrics and a killer cast provide two-and-a-half hour of of side splitting laughter. Jefferson Mays is terrific as the 8 murdered D'Ysquith family members and plays the role for big laughs. But the performance driving the show is the killer charm and charismatic performance of Bryce Pinkham as Monty. His role is understated by comparison to the one Mays has, however, he is equally adept at physical comedy. His facial expressions and murderous eyes capture you from the moment he sits at the desk to pen his memoirs in the opening moments of the show. Here is an open plea to TONY voters...please do not overlook Mr. Pinkham's performance. Lisa O'Hare looks stunning and her vocals are soaring. You simply can't take your eyes off of her when she is on stage. She is my best bet for Featured Actress in a Musical! During our theater weekend we saw 5 great shows, but, A Gentelman's Guide... was far and away the best of the best! Don't miss it!

Do not miss this thoroughly engaging, wonderfully theatrical farce. We were delighted at every song, every caricature, and every comic vignette. I look forward to my next visit to NYC so that I may revisit this experience.